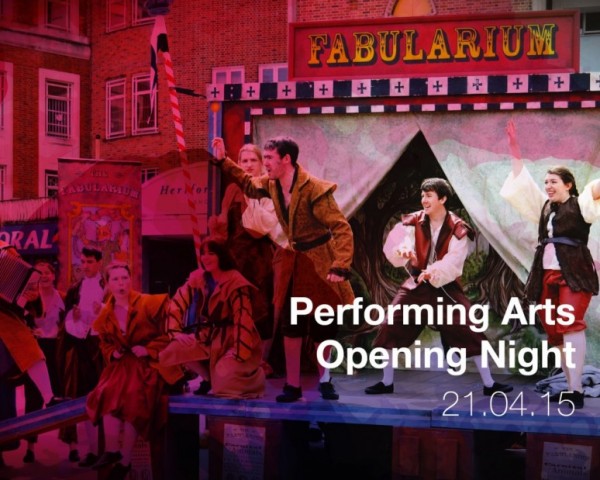 From the 22nd of April, our final year performing arts undergraduates are taking over your campus!
Here’s all you need to now about what they are up to for 2015’s #CovDegreeShow

Where? Ellen Terry Media & Performing Arts Building When? 23rd-25th June, Ticket price: £7.50 per day, +£1 for a second day. For more info or to reserve your place, e-mail Follow Me Out, or visit their Facebook & Twitter.

This 3 day student-curated festival will feature a wide range of final year dance projects. The Ellen Terry building will be filled with collaborative creative works including film, live performance, presentations and discussions. Follow Me Out will showcase the work of final year dance students and feature a variety of works, including a very special guest performance from Flock-O-Mania on Saturday 25th between 11:00-14:00.

Theatre and Professional Practice – ‘Tender Napalm’ and ‘Angels of Desolation’

‘Tender Napalm’ as interpreted by the CrackedCrystal Theatre Company.
Where? Ellen Terry Media & Performing Arts Building. When? Thursday 14th May: 19:30. Tickets: £5 for adults and £3 for concessions. For more info or to reserve your place, e-mail CrackedCrystal or visit their Facebook & Twitter.

Tender Napalm is a final year piece that explores one couples relationship. The audience watch as the relationship is tested when faced with coming to terms with a tragic loss. Both man and woman use their imagination and distorted visions to escape the reality around them by trying to create a new world.

An original play inspired by Nick Hornby’s novel ‘A Long Way Down’. The play is about four complete strangers who feel their life is at a loose-end. On New Year’s Day, the individuals go to an abandoned rooftop in central London, to make a life changing decision. Little do they expect to see three other people having the same idea. So at a time that signals a new beginning, it could signal the end. Hand of Doom is a Black Sabbath tribute band that will be paying homage to Sabbath for their contributions to Heavy Metal, and also in recognition of Tony Iommi receiving his Doctorate at Coventry University. The performance will include a selection of 14 original Sabbath songs, including War Pigs, Iron Man and Paranoid. The concert will be made as authentic to the era as possible, for example by dressing in 70’s style clothing.

“All of our profits are going to Marie Curie Cancer Care, for the wonderful work they do” We will be hosting a video game tournament evening, featuring games such as League of Legends, Smash Bros and Pokémon. There will be a best-of-3 League of Legends grudge match between Warwick University and Coventry University. This will be followed by a video game music concert, featuring recognisable music scores from your favourite games as well as original compositions inspired by the art of gaming.

There will be a variety of other student-organised performances accross the midlands, you can find full listings on our events calendar. For information about all performances and performers just visit #CovDegreeShow.
To get a preview snippet of most events you should attend the Performing Arts opening night, on the 21st of April. For a taster – simply register here for tickets!

Don’t forget to follow #CovDegreeShow for full details of everything and everyone taking part!