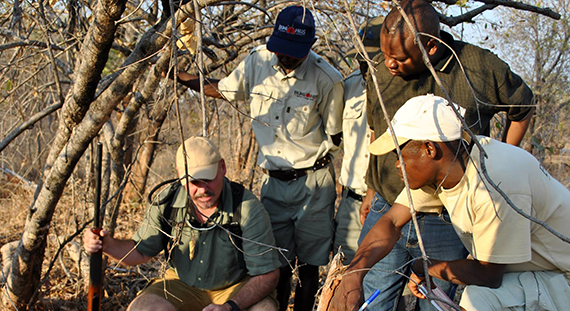 Stop the Bloody Killing!  This is the mantra of many individuals and organizations engaged in a fight against poaching.  At its most simple definition, poaching is the illegal practice of taking natural resources which do not belong to you.  What probably immediately comes to mind is the poaching of rhino horn, elephant tusks, and tigers.  For example, the Save the Elephants campaign estimates that 33,000 elephants were slaughtered for their ivory between 2010–2012.  Last year, 1,004 rhino were killed in South Africa for their horn.   Approximately 3.4 million tonnes of bush-meat is illegally removed every year from the Central African regions.  However, poaching also covers the illegal removal of other natural resources such as wood, minerals, flora and fauna.  Some reasonably argue that you can never stamp out poaching.  As long as there’s a market for the product being poached, and people living in poverty reliant on bush-meat or firewood, the practice of poaching will continue.  The human population across Africa is projected to rise to a further 1.1 billion people by 2050, so the demand for natural resources looks likely to increase.  The outlook may seem bleak for Africa’s wildlife and flora, but this shouldn’t stop us from trying to stop poaching and to offer people sustainable alternatives.

In association with Rory Young and Chengeta Wildlife, here at ALERT we’ve been actively setting-up effective anti-poaching training across Africa.  Tackling poaching is not simply about arresting poachers, even if you can catch them in the act.  It’s about addressing the motivation for poaching.  Anti-poaching training must be both proactive and reactive.  Education and awareness of the negative consequences of poaching are as important to anti-poaching training as knowledge on poaching activities in the area and how to track those involved in it.  This relies on building good relationships with local communities such that education initiatives can be implemented that increase awareness of poaching activities in their area and the consequences of unsustainable consumption of natural resources and wildlife.

Those who seek to prevent poaching must be accepted as part of the community, working for the good of the community to local support, whilst those who poach are regarded as a problem.  For the social psychologists amongst us, you may understand this as a matter of identity and resilience.  Any anti-poaching initiative must identify with the local people for it to be accepted and effective. This is what educational interventions need to address alongside developing sustainable uses of natural resources that can benefit a community in the long-term.  To that end, Rory Young and Chengeta Wildlife, together with ALERT, has reached agreement with Guinea’s Ministry of the Environment, Water and Forests, and the United Nations Office for Project Services, to provide anti-poaching training, utilising a proactive and reactive approach in their national parks.  Guinea holds one of the last remaining wild lion populations in West Africa, yet has not had any formal body of park rangers to protect that wildlife since 1966.

Agreement has also been reached with Malawi’s Department of National Parks and Wildlife to train existing heads of anti-poaching based in national parks into effective protection from poaching.  More African countries are set to follow.  Rory Young and Chengeta Wildlife, in association with ALERT, have produced a field manual on effective anti-poaching activities.  More information about the program and the manual can be found here.  An interview with Rory Young about the anti-poaching training, and the desperate need for this in Africa can be found here.

Next month I’ll tell you about one particular strategy we have in place here in Zambia to tackle deforestation and the practice of illegal charcoal production.