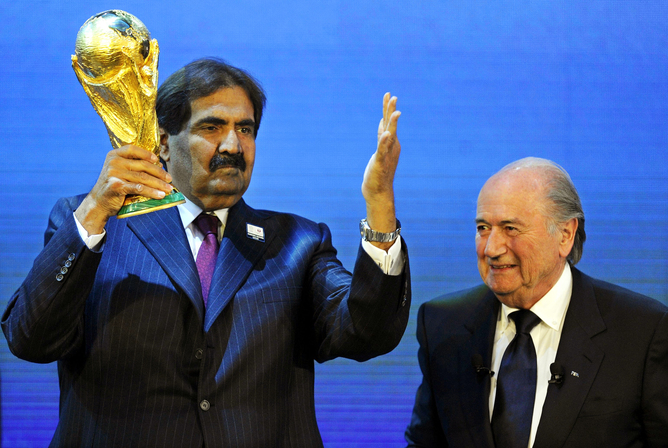 Four years on from the announcement that Qatar was to host the 2022 World Cup, the Middle East’s most ostentatious sporting consumer has become a staple of gossip across the world.

Whether in the newsroom or the bar, there has been little positive to say about Qatar hosting the World Cup. From the mistreatment and exploitation of immigrant construction workers to the absence of sporting infrastructure or a sporting heritage, the country invariably gets a bad rap.

Now that a FIFA taskforce has recommended the tournament should be rescheduled from the summer to winter, at least high temperatures are likely to disappear as one of the sticks with which to beat Qatar.

That said there is already disquiet at this recommendation. The Association of European Professional Football Leagues and its member clubs have expressed their disagreement with the proposed change, claiming it will “perturb and cause great damage to the normal running of the European domestic competitions”.

This debate will run and run, culminating either in court room drama or the creation of a FIFA compensation package. Lest we not forget, in football money ultimately talks the loudest. In the meantime, expect more accusations, threats and recriminations – with, rightly or wrongly, Qatar sat centre-stage.

As such, it’s hard to imagine a new, more positive discourse emerging in which Qatar becomes a global beacon for rigorous planning, efficient organisation, generous resourcing or otherwise. Yet surely there has to be something positive about spending a winter’s evening in Doha watching a Brazil versus Spain game?

If nothing else, the 2022 World Cup will be a temperate one. At that time of the year, temperatures normally peak in Qatar at around 25°C during the day – ideal for football. During this year’s World Cup in Brazil, pitch-side temperatures during matches often reached the 40s. So we can look forward to matches being played in something akin to a northern European summer climate.

In addition to avoiding the Gulf heat of May to June, moving the World Cup to the end of 2022 also neatly avoids any potential conflicts with the month of Ramadan (which starts on April 2 in 2022) and the 2022 Winter Olympics (which are due to take place in January and February).

Beyond the practicalities, there are hopefully some more fundamental and far-reaching benefits that will arise from the World Cup 2022 debacle. The first pertains to FIFA: the fudging and prevarication (not to say the accusations of corruption) that have flowed out of the decision back in 2010 have erased any lingering doubts that the organisation needs to change.

Qatar is forcing the issue, and we may ultimately see a new president being elected and a new governance system being put in place at the organisation’s administrative bunker in Switzerland. The tournament has become a rallying point for everyone from former player Luis Figo to British MP Damian Collins and Michal van Praag, Chairman of the Dutch Football Association.

Governing bodies simply cannot run bidding processes according to a set of rules, which it then chooses to ignore in the light of subsequent turbulence. As we now know, this not only makes a mockery of a single decision, but also of everyone linked to this decision. November 2022 might be painful for some of us, but if in return we get a FIFA that is fit-for-purpose, then it will surely be worth it.

Football is global, but what about FIFA?

FIFA’s failure to respond effectively to global shifts and changes has been starkly exposed by the decision to award the World Cup to a nation where playing football in the summer has never been a regular occurrence.

The reality is that football is incredibly popular across parts of the world with very different climates to its traditional locales. Yet neither FIFA nor football has ever challenged the established, conventional way of awarding hosting rights. This means that, effectively since the first World Cup was held, large parts of the world have essentially been excluded from bidding processes.

Everyone in football should now feel challenged to confront the reality that international football is not just the domain of Europe and South America. This is even more significant in the context of global economic shifts.

A bid to host the World Cup in China will come, it is inevitable. One of the largest economies in the world, a population with a huge interest in sport, and a government investing heavily in football. It is inconceivable that games would not be hosted in Guangzhou, China’s third largest city.

The problem is, temperatures can peak in Guangzhou during the summer in the low 40s and the humidity is intense (conditions not unlike Qatar in July). There’s also the threat of disruptive typhoons. As with Qatar, it would probably be better for World Cup games in Guangzhou to be played at a different time of the year.

What we are therefore seeing in the case of Qatar could well be the emergence of a new model for world football that takes the sport beyond its traditions, conventions and comfort zones. As we have seen in Formula 1, the 21st century will increasingly see tournaments drawn away from their normal, cosy June slots by countries whose economic strength is growing, and which have different climates and fans with different needs and demands.

In this context, rather than seeing Qatar as a one-off inconvenience, the football world needs to engage with the new reality. Indeed, rather than condemning or rejecting these changes, the likes of European football clubs need to ensure they do not get left behind. There is money involved, so I am sure they won’t.

And while some Europeans might continue to baulk at the thought of a World Cup Final played on December 23 2022, it is worth remembering that Juventus played Napoli in the 2014 Italian Super Cup on December 22 … in Doha, Qatar. For some, money does indeed talk.