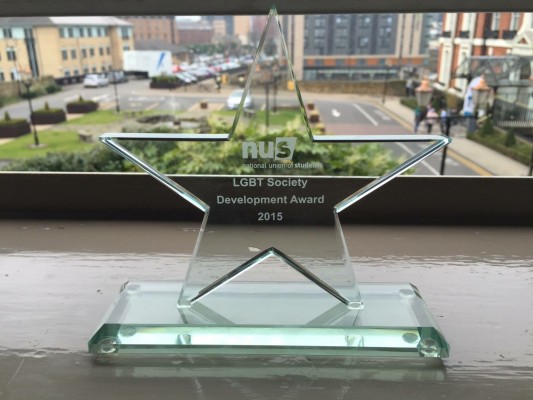 Wednesday saw our LGBT society pick up a super shiny award for ‘society development’ at the NUS LGBT conference.

I wanted to know a little more, so I caught up with three members of the society – Josh, Cameron and Sam, to learn about what ‘society development’ actually means, to find out more about the awards and what this means for society.

Who can enter the awards, and how are the winner’s chosen?

J: The awards are open to all LGBT+ societies in further or higher education in the country.

C: They are hosted and run by the national union of students (NUS). The winners are selected by the NUS committees.

J: The award is given to the society that has displayed the most progress in activity, membership and engagement over the last 12 months.

C: I’ve seen a massive increase in motivation since we started taking lead roles in campaigns across the university. We’ve developed as a society; we have gained the momentum we need to carry on being successful!

S: We’ve taken part in awareness campaigns such as LGBT History Month, and worked with the Students Union on projects such as Think-Outside-The-Box. As a society, I think we’ve developed our initial desire of creating a ‘safe space’ for LGBT+ members to meet. We now aim to make more of a difference. Whilst developing this desire for change, there has been a great bond between members of the society. We’re all great friends who get on really well and support each other.

What does the award mean to you, as a person and as a society?

J: For me, it shows that the hard work and time I’ve put in to try and encourage our members to be visible on campus has paid off. In it’s previous form, the society always appeared very closed off to me. If I had felt that it was accessible and open to new members, I probably would’ve benefitted from the support of the society during my first 3 years. I think I could have been more open about who I was, or at least feel less ashamed if there was someone telling me it was OK. I bit the bullet this year and started being ‘out’ at university, about my sexual orientation and gender. As a society, the award increases our visibility and allows members to realise that we are making a difference, and that the things we are doing are worthwhile.
S: Receiving this award has shown me that people have noticed what we’re doing. That makes me want to continue the good work we’ve done this year. I also hope that it’s shown this to the rest of the society, encouraging us all to improve upon what we’ve done together.
C: The reaction I received as I walked into the ceremony meant the world to the society and to me. It was then that I truly knew we were recognised as a leading society at Coventry University.

Cameron, you were invited to attend the awards dinner, how was it?

C: All of the NUS delegates that attended the conference were present at the awards dinner. I met some amazing people from all across the country! There weren’t any celebrities, but some of the NUS officials were there which was pretty cool! The NUS LGBT Officer, Robbie Young, was also there and he is an awesome guy who has supported us throughout. It was nice to see him!

What happens now? Is there a new award title that you have your eye on for 2016?

J: I’d love for the society to win “best campaign of 2016” or “society of the year 2016”. I think that’s what we need to work towards. We have shown that we’ve improved but we now need to create an even bigger impact on campus.

S: For me, our main goal is changing the things that we’ve been campaigning for. We can then aim for new goals next year in an attempt to do everything we can to fix the world. It would also be nice to etch an award title onto the glass panel in the hub, perhaps something like “Most improved Society” or “Best Political & Campaigning Society”. This would be a great source of encouragement.

What would you say to any students out there who want to join your society?

J: Come and join us to make 2016 our most successful year. We’re open to anyone and everyone, and we are a lovely bunch of people. You don’t have to be ‘out’ to join, all meetings are confidential and you can be as involved (or not) as you’d like.

S: We want more people to be a part of what we have. If you’re LGBTQIA+ or want to get involved in campaigning for equality on campus, then join us! We have rainbows!

C: I just want to say thank you to anyone and everyone who has supported us with our campaigns to raise awareness of LGBT+ issues around campus. We have enjoyed this year immensely and it has been worth every minute!