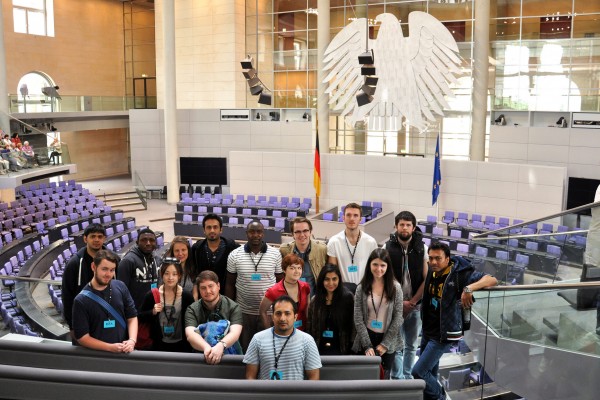 After 13 weeks of learning a new language, Linguae Mundi students had the chance to practice their freshly acquired language skills by visiting the capital of Germany, Berlin.

Expectations rarely meet the reality… but surprise; Germany’s history was not just about Hitler! Visiting museums and cultural attractions gave us the chance to experience an illuminating mixture of history and contemporary life in Berlin. The city’s vibe gave us the feeling of travelling through time, between old and new and back again.

The students had loads of fun trying to order food, asking for directions in German or just trying to start basic conversations with Berlin citizens. After a week full of adventure, I can honestly say that this field trip was undoubtedly worth it. I have met amazing people, made new friends and created memories. Most importantly, as a trip leader I have managed to add another skill to my repertoire.

So has Roxana whetted your appetite for travelling yet? Well, here are some more student testimonials which will certainly make you want to get on a plane ASAP!

Time is probably one of the most valuable aspects of life to German people, yet during their free time, they can be the friendliest people around. Berlin has nice weather, a beautiful environment and delicious food as well. As we reached our last night in Berlin, we sat down together, had dinner and played games. We were just relaxing and passing time, it was fun.

The DDR museum is well worth a visit, also the former border crossing ‘Checkpoint Charlie’ and its museum. The Memorial to the Murdered Jews of Europe and the Memorial to Homosexuals persecuted under Nazism both bring to mind the suffering that took place whilst the guided tour of the Reichstag parliament building was a definite highlight of the trip. I also enjoyed the visit to the old film museum in Potsdam, home to the biggest studio in the world, and taking part in a Ritter Sport chocolate making workshop.

My absolute favourite thing was the beer, as I’m a student the vast amounts of beer, and how cheap it was, was something special on its own! It wasn’t just about that though; next year, I’ll be spending a year in Germany on Erasmus, and this trip has given me the chance to practice my German with native speakers. The week has also given me the chance to learn some important parts of the German culture to see how things work there.

I strongly believe that this international experience provided me with knowledge and information that otherwise I would not have had the opportunity to gain. Adding an experience like this to my CV makes me more employable in a competitive industry like aviation. I would like to thank the coordinators – Cedric and Roxana – for their devotion and responsibility over all of us, and for making this trip even more interesting than expected.

Linguae Mundi is an annual foreign language programme run by The Centre of Global Engagement (CGE) and is offered to students, staff members and alumni. Please email Linguae Mundi if you would like the opportunity to join Linguae Mundi on another adventure.