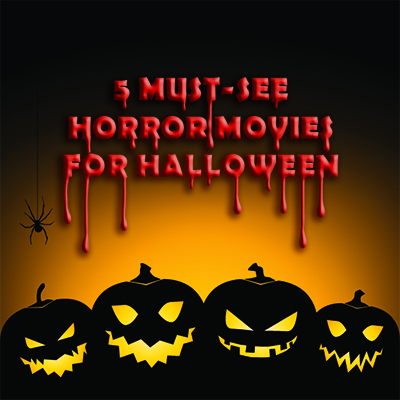 Halloween is upon us, which for most students means a trip to Primark in search of cheap clothing that can be ripped up and bloodied for a night out. If that’s not really your thing then we’ve got your back – there’s no better time to turn the lights off, grab a snack and watch some scary movies!

To help you decide on what to watch, we’ve compiled a list of 5 horror movies that we highly recommend you see this Halloween. Instead of putting down old classics such as Sixth Sense, The Exorcist and Dracula like every other top horror movie list on the internet, we’ve decided to focus on post-2000 horror movies. Hopefully they don’t cause you too many sleepless nights!

Let Me In is a Hollywood remake of the cult Swedish movie Let the Right One In. The original is highly recommended, however, if you’d rather not watch subtitles for 2 hours then the remake is a more than adequate replacement.

Whilst more eerie than out and out scary, Let Me In revolves mainly around the dynamic between a lonely young boy and the strange female vampire that moves in next door. Without going full-on Twilight, it explores how a vampire with an (obviously) troubled life can discover relationships and human interaction while maintaining her requirement for blood.

Considering how many successful international movies get a flop of a Hollywood remake, director Matt Reeves does a fine job of maintaining the tone and intrigue of the original. It also stars a young Chloe Grace Moretz, who plays the mysterious, outcast vampire role excellently.

Some of the best horror movies are the ones that prey on people’s fears while maintaining a sense of realism. The Strangers is most definitely one of those movies. A house in the middle of nowhere – check. Limited phone signal and no internet connection – check. Knocks at the doors and windows by random people in the middle of the night – check.

The movie revolves around a young couple being terrorised by strangers in masks throughout the night. Stranded and with no way to contact the outside world, can they survive until sunrise? The tension is slowly cranked up over the first part of the film, before unleashing jumps and scares galore during the final hour. Certainly not one to watch if you’re home alone one night!

The House of the Devil

This is probably the movie on the list that the least amount of readers will have seen – The House of the Devil is a throwback to the slow-building, suspenseful horror movies of the early 80’s.

The story is based around a young woman taking an unusually well-paid babysitting job for an elderly (and very creepy!) gentleman. The tension builds as she explores his large Victorian mansion and begins to discover that things might not be as they seem.

Some slow-build horrors can get a bit boring until the final reveal, however, The House of the Devil is most definitely not one of them – director Ti West has mastered the art of keeping the audience intrigued and engaged all the way until the shocking crescendo.

Moving from the obscure to the more mainstream, 28 Days Later is probably going to be the one you’re most likely to have seen and/or heard about. In fact, critics have gone as far to say that Danny Boyle’s 2002 hit revitalised the entire zombie-horror genre!

For those unfamiliar with the plot – a chimp with a ‘rage’ virus is released by animal rights activists in London. The infected chimp proceeds to pass on the disease to humans and it spreads like wildfire across the city, turning the population of our capital into flesh eating, sprinting (yes, sprinting!) zombies. The movie then follows a group of survivors in their hope to find safety amongst the chaos.

The sequel, 28 Weeks Later, gets an honourable mention too. Often sequels to highly successful movies fail under the weight of expectation, however, this one manages to maintain the scares and intensity of its original perfectly.

The Babadook is a nerve-shredding family drama about a widowed mother and her monster-obsessed young son, who believes something has entered their house after reading a book called ‘The Babadook’.

This is a movie where the scares kick in early and the audience is taken on a rollercoaster ride over the course of the 94 minute run time. The Babadook relies on real relatable terror as opposed to cheap jumps and worn out horror clichés, and has a moving family story to go with it. A must-watch for all lovers of the genre.

Do you agree with our list? Share your must-see horror movies with us in the comments and on social media!