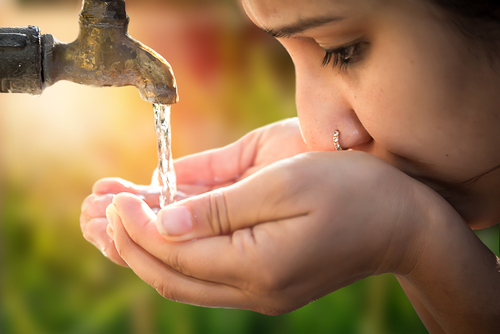 I know what you’re thinking, really UnCOVered, water? The stuff that comes out of a tap and I ignore so I can drink a Coke instead?

And to you water haters I say, you bet I’m writing about water! Water is amazing and in honour of World Water Day, it’s time everyone understood that – with some top notch facts from around the internet!

How’s about that for a fact, eh? Next time you’re sitting in the pub just think about all the effort water put into making your pint a possibility.

2. 70% of the Earth is covered with water but only about 1% of the world’s water is readily available for human use. Nearly 97% is salty or otherwise undrinkable. Another 2% is locked in the ice caps and glaciers. That leaves just 1% for all humanity’s needs

Not so cocky about using that tap now are you? It’s staggering that all the water we use between us on a daily basis is only 1% of what’s out there.

If this wasn’t amazing enough, this percentage changes as you grow. As a full grown adult you’re between 60-70% water, as a newborn baby you were 70% water and as a foetus you were 95% water! Incredible.

4. A person can live about a month without food, but only about a week without water

As a lifelong lover of food even I am sad to see water take yet another victory here. I’m still searching for the stat regarding how long you can live without a pizza.

5. The biggest known cloud of water vapour was discovered by NASA scientists around a black hole 12 billion light years from Earth. There is 140 trillion times as much water in it as all the water in the world’s oceans.

Just think about that for a minute… Consider how vast our oceans are and then times them by 140 trillion! That’s a whole lot of water.

6. All the water on Earth arrived in comets and asteroids. It happened between 4.5 billion and 3.8 billion years ago, during a period called the Late Heavy Bombardment.

Here’s some serious fuel for the conspiracy theorists amongst us. Is water and alien substance? Are we all made of water because we’re really just alien substances? The evidence is right there, people…

7. Since life began, we have had the same amount of water on the planet. To the best of human understanding, life can only exist with water

To me this is an amazing example of the cyclical and resourceful nature of our planet. With as much damage as we’ve done to the Earth, for it to still carry on the same way as it did millions of years ago is staggering!

At Cov Uni, we’ve got our own centre doing serious water research known as CAWR – The Centre for Agroecology, Water and Resilience. If this blog has inspired you to heed the university call and put on your smarty pants, you might wanna check it out.

I’m hoping now we can all agree that water is not only amazing, but definitely worth writing about. Here’s to you H2Woah!