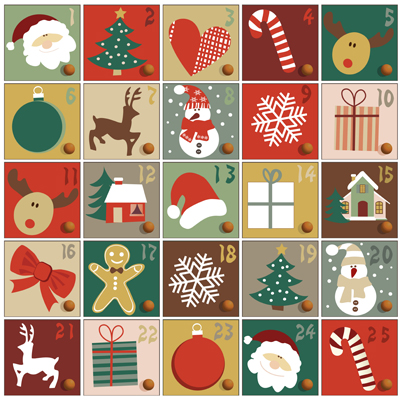 Many of you will have already chosen your advent calendar and are now eagerly awaiting the start of the Christmas countdown (and the first chocolate treat!) but do you know where advent comes from?

Advent comes from the Latin word ‘adventus’, meaning arrival or coming. As Christians believe that Christmas celebrates the arrival of Jesus Christ on earth, the church coined the term ‘advent’ to count down to his arrival on Christmas day.

They believe that the season of Christmas begins at the end of advent, ie: the eve before Christmas = Christmas Eve! Their Christmas season then lasts for twelve days, ending on January 6th, known as Epiphany, or Three Kings Day, which marks the arrival of the three kings and thus the baptism of baby Jesus.

There are four Sundays of Advent before Christmas day, with the name ‘Advent Sunday’ attributed to the first – this is always the Sunday nearest to the 30th of November, St Andrews day.  To mark these Sundays, many Christian houses have a symbolic Advent wreath. The wreath is made of evergreen branches weaved in a circular shape – symbolising God’s eternal life – and holds four red candles. Each candle represents one of the four Sundays of Advent. In some wreaths a fifth candle (traditionally white) stands in the centre of the circle. This is the Christ Candle, and is lit on Christmas day.  Together the candles are said to symbolise the light of God coming into the world, through the birth of his son Jesus.

Although the first Advent Sunday often falls in November, Advent calendars always start on the 1st December, with 24 ‘windows’ (hidden behind ‘doors’) counting down to Christmas eve.

The tradition is said to have started in Germany in the early 1900s:

At first, the days preceding Christmas were marked off from December 1 with chalk on believers’ doors. Then in Germany in the late 19th century the mother of a child named Gerhard Lang made her son an Advent Calendar comprised of 24 tiny sweets stuck onto cardboard. Lang never forgot the excitement he felt when he was given his Advent calendar at the beginning of each December, and how it reminded him every day that the greatest celebration of the whole year was approaching ever nearer.

As an adult he went into partnership with his friend Reichhold and opened a printing office. In 1908, they produced what is thought to be the first-ever printed Advent Calendar with a small coloured picture for each day in Advent. Later on, at the beginning of the 20th century, they hit on the idea of making the pictures into little shuttered windows for the children to open day by day in order to heighten their sense of expectation.

Originally the cardboard windows opened to reveal religious pictures, although now they tend to reveal a festive picture and a chocolate treat…or a piece of lego, or even a nail varnish! Modern advent calendars are now available around the world, and the tradition is no longer seen as purely for Christians. To many it is simply an exciting way to count down to Christmas day!