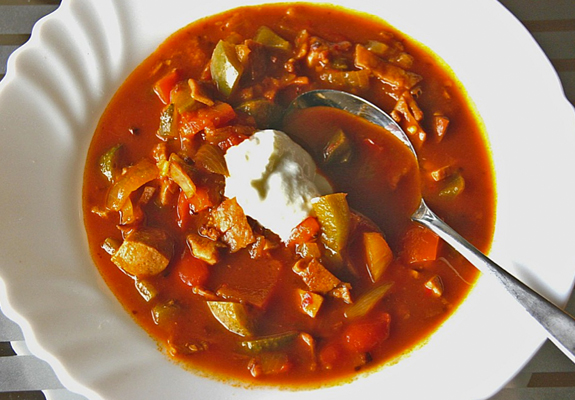 Do you ever eat, smell, hear, or see something and you are instantly transported back to another time and place? Perhaps it’s the smell of fabric softener that puts you back in the guest bed at your grandmother’s house, or hearing the jingling of some bells which take you back to that little shop you discovered on holiday…

I’m Cedric and for 1.5 years, I was working and living abroad in Germany. I now work as a Linguae Mundi academic manager at the Centre for Global Engagement (CGE) where we support students to send them to study and work abroad, get them on sponsored field trips, or take part in cultural or language activities.

Back in Germany, I did the dishes while watching people walking in the snow. I was a freelance English teacher in the evenings. And, you know, there was some weird window shopping… But the thing I miss the most from Germany is Soljanka, which I had probably every two weeks in a neighbourhood café we affectionately called “at the Mums’”, because of their home-made food and their no-nonsense service. Soljanka is a soup made of pickled cucumbers, their brine, onions, bell peppers, and sausage. A good “Soli” is a warming mixture of savoury and sour. Mums’ touch is to add on top a slice of lemon and some whipped cream – from a can.

For what it lacks in class and finesse, it makes up for in cultural value. Soljanka became a staple food in the former German Democratic Republic. Originally a Russian dish, the Germans adapted it to their own tastes and locally available ingredients. Germany might, since 1990, be a unified country, but only half the country has tasted this soup. Will you try it the next time you’re in Berlin, Leipzig or Dresden?

So yeah, for me it’s a soup you can buy in a tin and upgrade with whipped cream. Soljanka brings back happy memories of a life abroad. For you, it could be anything and you won’t know until you give it a try. Learn a language and go out there, study or work abroad. Create your own happy memories!

That was delicious – Das war lecker

Keep the change – Stimmt so