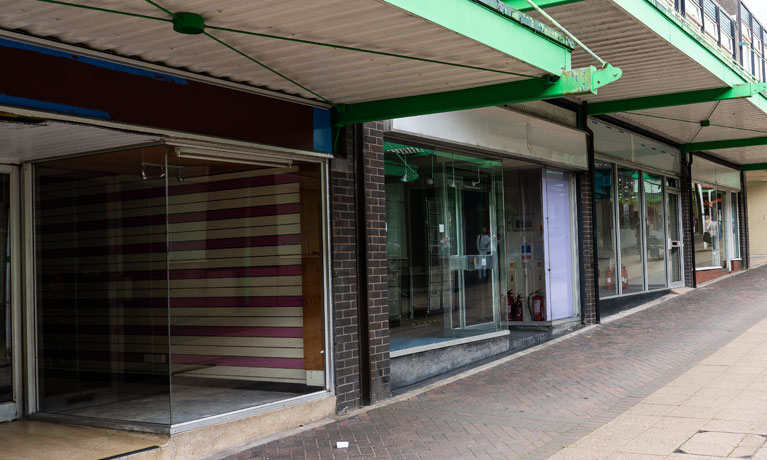 By Professor Lyndon Simkin, Executive Director of The Centre for Business in Society

UK high streets were in deep trouble before the pandemic struck, but now they face even more challenges.  So is Covid-19 their death knell?  Will the emerging rapid changes in planning policies, consumer behaviour and societal attitudes simply pull forward much-needed change?  Perhaps now is the time to accept that the traditional high street concept is no longer fit-for-purpose, cease our resuscitation attempts and start afresh by re-thinking such land use?

There seems to be something of a ‘perfect storm’ for our town centres.  Fewer shops trading than a few months ago, big brands announcing further closures, plans already on the table for repurposing retail space no longer viable, travel restrictions making it harder for people to reach town centres, now fewer people working in city centres, and consumers have far more on their minds than popping into town for some retail therapy!

Oasis and Warehouse, BrightHouse and Beales department stores pulled the plug as Covid-19 struck, while New Look, Cath Kidston and Laura Ashley have restructured and are teetering.  Now even the likes of John Lewis and M&S have stated that not all of their stores will reopen after the current lockdown measures cease.  There are a number of household names on the brink and it is likely that many more ‘closed for Covid-19’ signs will be made permanent.  Twenty years ago, the demise of a retail chain would have been seized on by other retailers desperate to expand their portfolios or roll-out additional concepts and fascia.  Even over the past five years of retail gloom, the surge of coffee shops and chain restaurants soaked up much of the available real estate.  Covid-19 has forced the closure of cafés, bars and restaurants, with many independents going under and several large chains, such as Carluccio’s, Byron, Chiquito, Cafe Rouge and Bella Italia, announcing closures of branches and fighting for survival.  Many were already struggling in the face of new competitors, but the Covid-19 crisis has escalated their problems, perhaps fatally.

Plans For Alternative Usage Are In Tatters

For town centres, however, the most significant implication from this crisis might be the termination of many existing schemes for the alternative use for shop units and former department stores on our high streets, intended to breath life and bring footfall.  As an example, it has just been disclosed that in my local area, two of Debenhams’ stores will not re-open after the lockdown, with the company failing to negotiate rents down, and a nearby branch of House of Fraser is to close within weeks.  The older Debenhams in Stratford is now destined to become a hotel, removing 25,000 ft² of retail space from the central point of the town centre, while the landlord for the newer Debenhams on the edge of nearby Warwick is seeking a new tenant; but already on its retail park several sheds stand empty and forlorn.  More worryingly, the fate of House of Fraser in Leamington is now destined to be only a few street-facing shop units, with the rest of this once anchor department store turned into offices.  The original closure plan had been for a fitness brand to occupy the basement, retail on the ground floor, a multiplex cinema brand to take the first floor and rear, with two levels of commercial offices above.  Covid-19 has put paid to the plans for both the gym and cinema operators, so minimising the injection of amenities to the high street in question.  It is not only this department store in Leamington whose plans have been ripped up.  To make matters worse, the trend over the past few years for empty shops to be adapted for everything from soft play, crazy golf, trampolining, fitness centres, craft making and cafés, has been halted by the pandemic and the associated health protocols coming from Government.

Harder To Get To

Coventry was one of the first Councils in recent weeks to announce changes to roads within the shopping zone to make it safer for pedestrians and cyclists to socially distance, with traffic banned on some streets and others made one-way, hindering the car-borne shopper’s access.  Combined with cuts to rail and bus timetables, the public’s unease at travelling in ‘virus-filled’ public transport compartments, and now moves to impose social distancing on public transport, the numbers of shoppers coming into city centres inevitably will be further reduced.  This is compounded by two other significant changes: altered working practices and consumers’ radically altered priorities.

There are now far fewer shop and restaurant workers, who themselves are not spending while in our city centres.  The biggest change, though, is with the move to remote working.  While some of us, post-pandemic, will return to our offices and previous working patterns, many companies have already announced that they will continue to endorse at-home and remote working.  City centres are not just composed of shops.  Central business districts include entertainment centres, local government offices, financial services and – above many shops and in towering blocks – thousands of offices.  Their occupants daily are also customers in the shops and cafés beneath.  Even if only 10% of office workers no longer routinely come to their offices, the impact on the retailers and restaurants in city centres will be severe.  And it might be more than 10%!  Even the mighty office developments such as Canary Wharf are watching their FinServe and Media clients announce plans to radically alter working practices and permanently reduce headcounts in daily attendance.

Consumer Priorities Do Not Include The High Street

Add to this maelstrom our own fears and concerns as consumers, and the perfect storm for retailing is complete.  High streets exist to showcase products, intending to entice consumers to part with their disposable income, particularly over the last thirty years since most shopping for necessities – groceries, DIY, electricals, pets – has moved out-of-town.  The town centre has also provided a meeting hub, either for social shopping trips or to visit a club, bar, restaurant or cinema.  For many consumers, the focus now feels to be survival, rather than pampering.  Even when our high streets re-open after lockdown, just how much of our time we will want to spend on them will undoubtedly be different from back in March, with potentially dire consequences for the brands trading in those stores.  How the cafés and restaurants will adapt to social distancing, whether all remain viable, how many have already liquidated, and the extent to which consumers feel at ease with their families in such settings, inevitably will all lead to reduced spends on eating out, and so creating more high street blight.

And then there’s recession.  As if life were not gloomy enough, the experts tell us that the upcoming Covid-19 generated recession will make 2008’s financial crash pale into insignificance.  Whenever there is recession, retail spending plummets, eating out and visiting entertainment venues decline and all non-essential discretionary spending is paired right back… exactly the commercial activities which are on our high streets and within town centres!

But Are The Likely Outcomes All Bad?

A long time ago, my PhD thesis developed a model for optimising store profitability based on town centre locations, sponsored by many retail giants seeking fast expansion of their store networks and aggressively competing for each site as it became available.  Often, they made offers without even having set eyes on the location or assessing catchments.  If the shop unit were close to a key trader or magnet – such as a department store, M&S or Boots – that was good enough.  Retailers could not open more stores quickly enough.  That was the 1980s.  Now, empty retail stores may well sit unused for years; a situation which is only going to worsen.

Perhaps there will be an awakening?  Rather than retro-fitting ad hoc ‘sticking plaster’ fixes to our high streets and town centres, marginally injecting flashes of new life into them, maybe the perfect storm now forces a radical re-think…  a re-balancing of town centre land use and a new set of priorities.  Brought about by the daunting combination of so much radical disruption to the status quo:

For 120 years, the march of multiple retailers, financial services, office developments, restaurants and bars, has eaten up the land within our town centres, taken away open spaces and parks, and forced out low-yielding activities.  Most residential land-use was banished, too, apart from low-rent poorer flats above commercial premises and more recently low-occupancy trendy apartments in and around some reborn entertainment hubs, such as Birmingham’s canal basin.

So rather than attempting to perpetuate the retailing dominance of the high street or town centre, should we not now embrace what has anyway been materialising?  Lots of neighbourhood centres and edge-of-town hubs, rather than one sprawling grand central business district in each city or town?  With the land currently protected by the planners for town centre commercial use instead allocated to housing, parks and open spaces, recreational and social use, rather than retailing?  Enabled by clearing away many shopping streets and repurposing commercial land for new-look housing schemes and planned central residential use.

Maybe this scenario, for many, is still a step too far.  Particularly during a period of uncertainty, in which many people inevitably will cling to the status quo and the ‘normality’ as it was until recently.  Nevertheless, there is no denying the perfect storm now sweeping through our retail streets, in which there will be many more big brand casualties and retail closures in the coming months.  This retail blight and further reduction in the pull of the town centre will demand new land uses and fresh thinking by planning authorities, developers, investors, transport providers, employers and, of course, the public.

Challenging and threatening times?  Or an era of new opportunities?  Either way, the traditional high street cannot cling to life as it had struggled vainly to do before the pandemic struck.