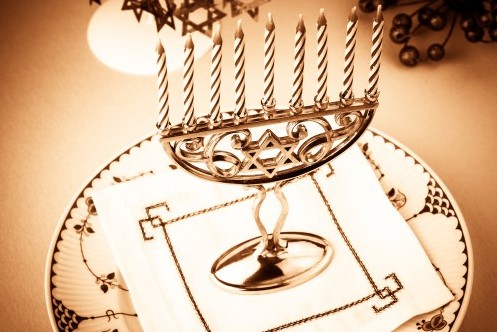 Also known as Chanukah, today marks the beginning of the special Hebrew festival of lights: Hanukkah.

Hanukkah starts on the 25th of the Jewish month of Kislev, the Jewish calendar is lunar based so it changes each year. This year Hanukkah falls on the 6th December.

The story of Hanukkah

The festival reminds Jews of a time over 2500 years ago when Antiochus, a Syrian king, tried to make the Jewish people worship Greek gods. A statue of Antiochus was erected in the Jewish temple and the Jews were ordered to bow down before him. The Ten Commandments forbid Jews to worship statues or idols and so they refused.

A small group of Jews called Maccabees rebelled, and after a three-year war they recaptured Jerusalem from the Syrians. But the temple was all but destroyed. The Jews had to clean and repair the Temple, and when they were finished they rededicated it to God. They did this by lighting the lamp (Menorah) – which was a symbol of God’s presence. Only one small jar of oil was found, enough for one day, but miraculously the lamp stayed alight for eight days. Source

How is Hanukkah celebrated?

Hanukkah is recognised with a Hanukiah, a nine-branched candelabra that’s placed in a doorway or window. The raised candle, sometimes centered, is called the Shamash. This is lit first then used to light the other candles, one to mark each of the eight days of Hanukkah.

To commemorate the miracle of the oil, a Jewish tradition is to eat foods fried in oil.

It is custom to donate money to charity; this is believed to prevent anyone from being unable to light their Hanukiah because they cannot afford the candles.

The Talmud refers to money on Chanukah when it cautions us to light at the very least one candle, per household, per night on Chanukah—even if we must go door-to-door for candle funds. The widespread custom of giving Chanukah gelt (money) enabled the poor to get the candle money they needed without feeling great embarrassment Source.

For more information about Hanukkah, or the Jewish faith, contact our Jewish society.

Our aim is to create a lasting Jewish life within Coventry, where all students are free to experience the rich culture and traditions Judaism has to offer, regardless of religious or cultural background; all are welcome! – Coventry University Jewish Society