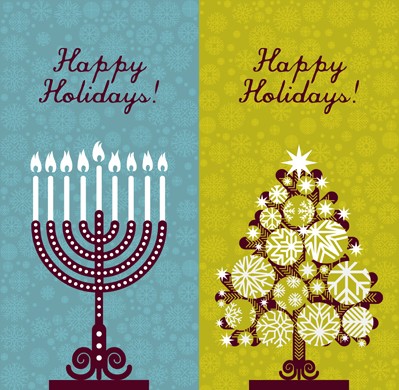 December isn’t just about Christmas; we’ve collected some examples of other traditional festivals and religious holidays that are celebrated across the world this month. The Pagan festival of Yule is celebrated during the Winter Solstice, which marks the shortest day and longest night of the year. In the Northern Hemisphere this falls in December, and in the Southern Hemisphere it falls in June. (Summer Solstice is the reverse of this.) This year Yule falls on December 21st.

Yule is deeply rooted in the cycle of the year, it is the seedtime of year, the longest night and the shortest day, where the Goddess once again becomes the Great Mother and gives birth to the new Sun King. In a poetic sense it is on this the longest night of the winter, ‘the dark night of our souls’, that there springs the new spark of hope, the Sacred Fire, the Light of the World, the Coel Coeth. Source

Pagan beliefs predate the Christian Christmas by hundreds of years. There are many parts of the Pagan festivals that have now been adopted by people of any faith, or none at all, that celebrate Christmas today. These include the Christmas tree, decorating houses in colours of red, gold and white, the singing of carols and the giving of gifts. Millions of people around the world are gearing up to celebrate Christmas with their families. Many, like myself, will be celebrating Christmas as a day of giving; presenting thoughtful presents to family and friends, spending time together and watching daft festive films and Christmas TV specials. For my family, there is no religious aspect to our Christmas. However, for Christians, Christmas is a holy day that marks the birth of Jesus who they believe to be the Son of God.

‘Nativity’ is the word often used for the story of Jesus’ birth. Both gospel accounts are used to piece the story together. The celebration of Christmas is often accompanied by the giving and receiving of presents and cards. This reminds Christians of the gift of Jesus, the son of God, beginning his earthly life. Source

Some Christians also don’t celebrate Christmas. Many of these are members of the Christian-based religious movement, Jehovah’s Witnesses. The official Jehovah’s Witness website gives the following four reasons why they do not recognise ‘Christmas’:

1. The bible does not give a specific date for Jesus’s birth.

It simply states: “There were also in that same country shepherds living out of doors and keeping watches in the night over their flocks. And suddenly Jehovah’s angel stood by them, and . . . the angel said to them: ‘. . . There was born to you today a Savior, who is Christ the Lord.’”—Luke 2:8-11.

2. Jesus did not ask his followers to celebrate his birth

The only event Jesus specifically instructed his followers to commemorate was his death, not his birth, and this was to be done as a simple communion meal. (Luke 22:19, 20) Note, too, that the Gospels of Mark and John are silent about Jesus’ birth.

3. There is no historical evidence for Christmas

in the mid-17th century, an act of parliament banned Christmas celebrations in England. In the United States, the Massachusetts General Court did the same. Why? The book The Battle for Christmas, says: “There is no biblical or historical reason to place the birth of Jesus on December 25.”

4. Christmas can be traced back to Pagan beliefs

The roots of Christmas can be traced back to pagan Rome with its mixture of festivals for honouring the agricultural god Saturn and the sun god Sol Invictus, or Mithra. Anthropologists Christian Rätsch and Claudia Müller-Ebeling, co-authors of the book Pagan Christmas, write: “Like many pre-Christian customs and beliefs, the old feast commemorating the yearly return of the sun was rededicated to the birth of Christ.” African Americans celebrate Kwanzaa over the seven days between December 26th and January 1st. The name Kwanzaa is derived from the phrase ‘matunda ya kwanza’, which means ‘’first fruits’’ in Swahili. The phrase is used to mark the first harvest; the first-fruits celebrations are recorded in African history as far back as ancient Egypt and Nubia.

During Kwanzaa, people decorate their homes with straw mats, ears of corn, and a candleholder called a kinara. They light a candle in the home each evening and may exchange homemade gifts. The seven-day celebration ends with a feast, usually held at a community center and featuring music and dancing. On the 8th December Buddhists celebrate the day that Buddha experienced enlightenment. Bodhi Day, or the ‘Day of enlightenment’

According to the legend, Siddhartha sat under a Pipul (Sacred Fig) tree and meditated to find the root of all suffering, thus liberating himself. He was able to ignore all distractions of greed, anger, restlessness and any other desire on his path to enlightenment. Some claim that Siddhartha made a great vow to Nirvana and to the Earth in order to find roots of his suffering. Others claim that he was able to discover himself by meditating deeper and deeper into his own roots to find inner peace.

Many Buddhists will meditate on this day, chant Buddhist texts or study the Dharma. In Buddhist homes, you will sometimes see a Sacred Fig tree. On Bodhi Day, these trees are decorated with multi-coloured lights and strung with beads to symbolise the way all things are united. They are hung with three shiny ornaments to represent the Three Jewels – The Buddha, the Dharma, and the Sangha. Source This year, the Jewish festival Hanukkah – the festival of lights – falls in December too: find out more about the story of Hanukkah.

Other festivals and holidays:

There are many other religious festivals that take place around the world in December: if yours isn’t mentioned here then please get in touch – especially if you would like to write a guest blog about your traditions!