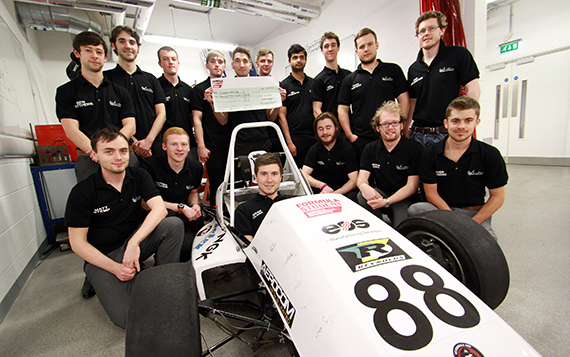 A group of motorsport engineering undergraduates at Coventry University has become one of only six Formula Student teams across the UK to be awarded a prestigious cash prize by the Institute of Mechanical Engineers (IMechE).

The £2,500 award – which was presented to the Phoenix Racing squad ahead of July’s Formula Student competition at Silverstone – is given to teams who impress the IMechE judges with how they use the annual contest as a learning experience.

Coventry’s 22-strong team will be entering a fully-fledged electric race car in this year’s competition, which will feature advanced lithium ion batteries capable of powering the F1-style machine to a top speed of 100 kilometres per hour.

At £10,300 the students’ car is costing just 0.01% of the cost of a modern F1 car to develop and build, and the team will be using its engineering creativity and innovation to take on some of the better-funded European university outfits which have dominated the competition in recent years.

Coventry’s team will be boosted by the cutting-edge facilities in the University’s high performance engineering lab based in the Engineering and Computing Building, including a shaker rig to tweak the chassis and a subsonic wind tunnel – built by Lewis Hamilton’s Mercedes F1 team – to fine-tune the aerodynamics.

The students plan to use the cash prize to develop the car’s electric powertrain in time for the Silverstone event, and will be taking part in a test session at the MIRA proving ground in Nuneaton in June to help maximise its performance.

Phoenix Racing’s last success in the competition came in 2011, when – against over 100 universities from 30 different countries – the team finished in the top 20 overall and won the award for creating the most fuel-efficient car.

This year’s event will see the students taking on 114 teams from as far afield as China, Canada and India in a bid to become the first British university to win the competition.

“It’s certainly going to be a challenge to win the event against such stiff competition, but the IMechE prize has given us a welcome boost and we’re all working very hard to ensure we give the big European teams a run for their money.

“This year is the first time Phoenix Racing has ever developed an electric-powered Formula Student car, so while we’re realistic in terms of what we can achieve using this technology for the first time, we’re also very excited about what opportunities it’s giving us both on the track and back at the University, where we’re learning a huge amount about high performance, zero emission engineering solutions.”

The 2014 Formula Student competition will take place at the Silverstone circuit in Northamptonshire on 9th–13th July – the week immediately following the British Grand Prix. For more information, visit formulastudent.com.