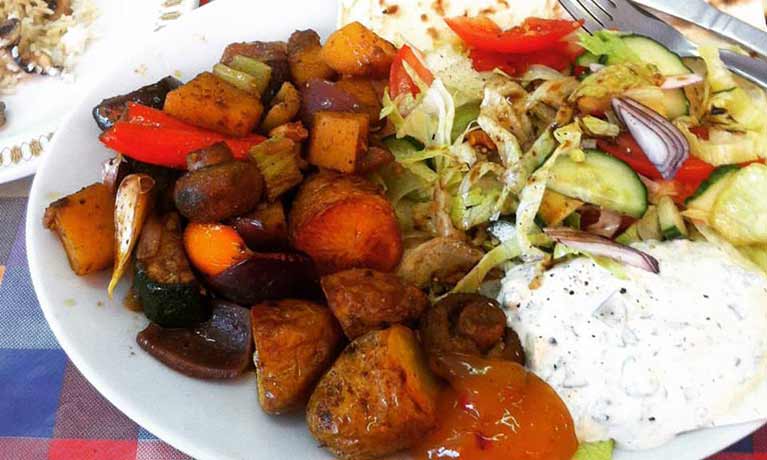 Using food to eat and using eating to think: reflections on doing research at public mealtimes.

Is there something special that happens when we eat together in groups? Is there a special type of atmosphere created around food where people feel able to make a contribution to the conversation, be it giving advice, offering opinions, engaging in debates or posing challenging questions? Are these eating activities places where people’s inclination to be sociable could be leveraged by researchers to create new insights and knowledge? Eating together and the convivial atmosphere which seems to transpire might support research on food insecurity, or around social experiences such as isolation, or help researchers understand customer motivations for participating in particular campaigns or causes.

This is the first part of a three-part blog series looking at new forms of group eating and exploring some ways of doing research with and about the customers and producers of these eating events. This blog post raises the idea that new, community-based forms of group eating practices might be trying to address the serious issues of our current culture such as food insecurity. And in doing so are prompting researchers such as myself to consider different ways of seeing the potential of this everyday practice to do much more than feed us. This blog looks at what commensality is, why it is important and how it might generate new ways of doing research.

Group eating practices or eating and drinking together in a common social or physical setting is known as commensality in academic parlance (Kerner and Chou and Warmind 2015). Commensality is described as a potent symbol of everyday life, marking some of our most important life transitions such as marriage or death, as well as providing structure and rhythm to our daily schedules (Brannen, O’Connell and Mooney 2013; Valentine 1999). Commensality is common in all Western cultures and is often seen as the social ‘glue’ that strengthens family and group bonds and as a site where social roles, norms and values are transmitted and reinforced (Bourdieu 1984; Chou, Kerner and Warmind 2015). Indeed, not only can commensality be seen as a microcosm or an engine of social life, a recent report of eating habits in the UK stated that ‘taking the time to sit down together over a meal helps create social networks that in turn have profound effects on our physical and mental health, our happiness and wellbeing, and even our sense of purpose in life.’ (Dunbar 2016:1) Emergent forms of commensality then, may be of interest to researchers across an array of disciplines. Over the Christmas period in the UK, well known for its celebratory feastings, we saw many restaurants, community centres and pubs opening their doors to the public over the holiday season, catering to the needs of people to experience both good food and good company during the festive season. However, beyond this time period the need for and the importance of, commensality, remains. With the festive season over how else might commensality feature in our lives as the year moves on? There are several ways that everyday eating in groups interests me. Firstly as mentioned in the opening questions, commensality might be the site of empirical research where new insights are gained through leveraging the chatty and informal atmosphere of the dining table. And in wishing to make use of these places of discussion, we might also go further and ask what methods of self-reflection or strategizing are community food initiatives using themselves to bring awareness and insight into their commensal practices?

The following blogs in this series discuss an approach to empirical research called design sociology which reflects the methods community groups are using to build user-shaped products and services such as the establishing of group eating services for social good.

But for now, let us consider how an emergent form of commensality which takes the sociality of the family dinner and sets it loose in everyone-is-welcome public spaces.

In the East Midlands region of the UK local community food initiatives have developed a type of public mealtime called social eating. This explicitly encourages the participatory aspects of commensality and offers an alternative to services such as commercial cafes or food banks that are based on eligibility and economically-mediated need. In framing social eating as positive, public activity a non-stigmatising approach to eating affordably in groups has been developed. Here the public is invited to meal share, not as part of a festive occasion or to mark a life transition but as a regular alternative to the current offer of takeaways, restaurants or home-cooked provision. Social eating spaces that are open weekly or monthly for example, to members of the public who might want to access a social meal for a variety of reasons, appear to be a pragmatic way of leveraging the power of commensality to do more than feed people.

The opportunity to share food with friends and with strangers at public mealtimes can create exciting spaces which allow us to begin thinking about the organisation and transformation of society in conjunction with the public. Commensality, or eating in groups, is the subject of much anthropological and sociological research, often viewed through an ethnographic lens in an effort to produce knowledge that is rich in cultural meanings and reflections. However, commensality has not been widely explored through empirical work on food insecurity, for example.

In some approaches to studying society, the eating and sharing of food is also used as a means of doing research: not just by studying how and why people eat together, but by using eating together to support the creation of data.

Eschewing the regular types of research approach such as surveying, using public mealtimes as a research resource and eating together with participants can create intimate, convivial and equalising ways of co-producing data. Additionally, current empirical research on food insecurity for example, has tended to employ approaches that are methodologically individualist, or which focus on the individual such as interviewing. Yet commensality is a group activity and a fundamental one at that. There is space here then, for exploring food insecurity for example, as it is expressed through and by, groups.

This approach opens up space to engage in group methodologies beyond the use of focus groups, for example, to go further than elicit opinions or reactions about an item or issue, but instead to endeavour to involve groups in the creation, coding and analysis of data. This co-production approach is exemplified in the methods of ‘design sociology’ and the subject of the next blog post.

It seems clear when we reflect, that commensality is a primarily social activity and that this sociality could be embraced by researchers to generate unique research opportunities. This overall approach to doing research on issues such as food insecurity with invested stakeholders rather than for them, has the potential to generate new insights and forms of knowledge that occur uniquely because of group deliberations and discussions. Additionally, I claim that groups who eat together could and should be the creators of knowledge, policies and interventions that concern them.

Indeed, if the challenges of responding to food insecurity for example, are to be met then involving user-groups in the creation of services aimed at them, is crucial. Then people eating together and thinking together might really make commensality something special.