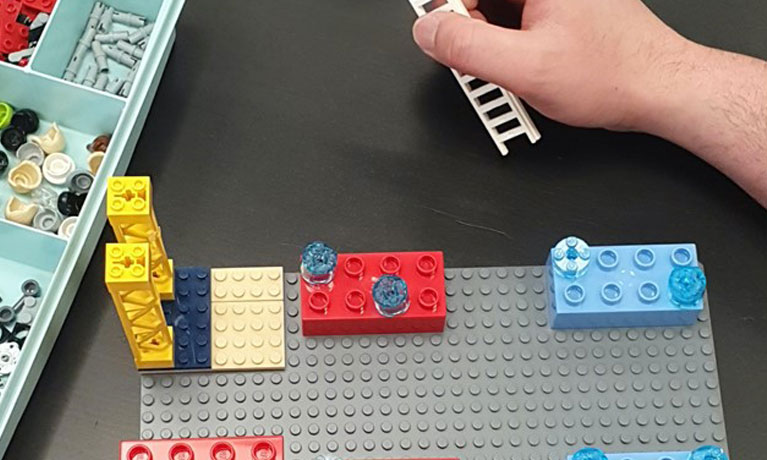 Just before the March 2020 lockdown, the CBiS financial capability research team was halfway through a series of community workshops exploring the conversations people have about their money.  The UK public is notoriously reticent to talk about their financial situation, with many individuals becoming financially vulnerable because they fail to seek help quickly when they hit problems. Following on from earlier projects funded by the Money Advice Service, the AHRC, Carnegie UK Trust and Barrow Cadbury, the team was keen to learn more about how ‘safe spaces’ for conversations can be created.  Reflecting CBiS interests in creative research methods, the workshops used Lego Serious Play methodology.  Researcher Hussan Aslam, a genuine enthusiast of all things Lego, had attended the relevant training and soon CBiS was the proud owner of an extensive (you have to see it to believe it) Lego kit.

As the seriousness of the pandemic became apparent, the team had to decide quickly how to proceed.  The Lego workshops were progressing very smoothly. Many participants had played with Lego as children and were enjoying this nostalgic trip down memory lane.  The method also seemed to make it easier for people to open up about this difficult topic. Although the team was desperate to continue with the data gathering, they were also mindful of their ethical responsibility to participants.  As Sally Dibb explains: “We asked ourselves, it is it okay to continue?  The venues were booked, the team primed, and the Lego sorted…. We even asked each other whether we could sanitise the Lego to make it safer for participants to use!  But of course, we quickly realised that we would have to postpone the remaining events”.

This left the team with the problem of unspent budget that had to be used within three weeks.  Anyone who has worked with Sally, Lindsey Appleyard and Hussan, will know that they fiercely resist leaving funding unspent. So what to do next?  Against a punishing deadline, the team used the remaining money into a quantitative online survey.  As they already had four Lego workshops and 15 expert interviews in the bag, they realised how powerful it could be to leverage the insights from this rich qualitative data set into a questionnaire, which could reach the wider UK public.

Developing a questionnaire is usually time-consuming and intense. But with just three weeks available, the team had to move at record speed to get it ready in time. To ensure quality data and lay the foundations for excellent outputs, the questions had to use accepted ways of measuring the key financial concepts and needed to draw on robust and established scales. But the team also wanted to innovate by creating a new way of measuring good financial conversations.  It was an intense and stressful period! Polling organisation Ipsos Mori, which has an established online research panel, was commissioned to conduct the research.  Luckily, all went to plan.  The Financial Capability team soon took delivery of a robust data set of 3,300 individuals, who had been selected to represent the UK’s socio-demographic profile.

With the help of CBiS numbers whizz, Pattapong Tiwasing, the data set is now yielding its secrets.  The early results are telling us more about how the UK public’s financial resilience is being affected by COVID-19, how and through which channels they are seeking help with their money, and how they feel about the future.  The financial conversations questions are shedding new light on people’s preferences for talking about their money, and the factors which drive them.  The data is also revealing more about who the public trusts, how they are navigating their finances in these difficult times, and how this varies according to their working situation, socio-demographics and urban or rural location.  But as the team gets deeper into the analysis, Hussan is refusing to give up on the Lego workshops, and is hatching a plan to post Lego kits to participants’ homes so that the team can run them remotely. Watch this space!