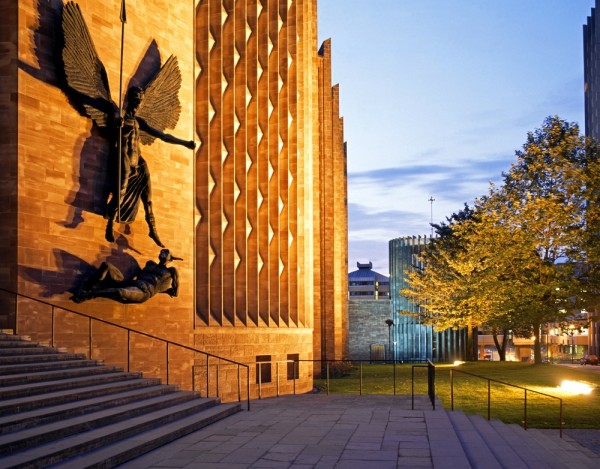 In order to gain a better understanding of why Coventry Cathedral is known as an inspiration for a ministry of peace and reconciliation across the entire world, we need to be familiar with the city’s history and culture.

Coventry’s earliest Cathedral was dedicated to Saint Mary and was founded by Leofric, Earl of Mercia and his wife Lady Godiva in 1043. Built in the city centre, the Cathedral symbolised the grandeur and wealth of Coventry in the middle ages. In 1539, along with the dissolution of monasteries, the Cathedral fell into decay.  400 years passed before the modern diocese of Coventry created, and the church of Saint Michael was designed as the city’s Cathedral. The plan above shows all three cathedral ruins superimposed on a modern street plan. The second Cathedral (known as the Old Cathedral) that was severely damaged  in the war is in the bottom right corner, the new Cathedral (the faint zigzag style building) backs onto it. The much larger building is Coventry’s original grand cathedral.

In WW2’s conflict, on the night of 14th November 1940, bombs dropped by the Luftwaffe profoundly devastated the city of Coventry. Considered a symbol of Coventry’s strength, the Cathedral was intentionally targeted and burned along with the city. In little over 20 years after its construction, the beautiful building was destroyed by the enemy air attack.

Initially, during the morning after its destruction, it was decided that the Cathedral would be rebuilt. But when the cathedral stonemason, Jack Forbes, noticed that two of the roof timbers had fallen in the shape of a cross, he set them up in the ruins. Later they were placed on an altar with the symbolic words ‘Father Forgive’. The Coventry Cross of Nails is recognised around the world as a symbol of peace and reconciliation. Formed with three medieval nails from the destroyed St Michael’s Cathedral, it embodied its ministry of hope and friendship with Germany in the years after 1945.

Inspired by this ‘message of Christ for reconciliation’, the leaders of the Cathedral Community decided against the idea of building a replica of the former Cathedral. Instead, they commission a design that would incorporate a new Cathedral whilst preserving the remains of the old one. The remains of the Old Cathedral symbolises the waste of war, while the new Cathedral is a sign of faith, trust and hope for the future of the world.

The building was consecrated in the Queen’s presence in 1962. Her majesty supported the idea that along with the ruins, the two buildings create one living Cathedral.

The Cathedral became a representation for what the city stands for; it celebrates life and peace for all locals and visitors. The Cathedral is open every day and all students of UK universities get a free pass! Visitors have also the opportunity to climb into the Cathedral’s Tower. The 700 steps are worth it in the end, as you’ll be treated to one of the best views of Coventry!

Coventry Cathedral has an extra special meaning for our students, as it is the venue for our graduation ceremonies:

The beautiful architecture, unique design and rich history make this Cathedral an attraction not to be missed! You can even download the Coventry Cathedral app before your visit to discover a fresh and new way of experiencing this stunning Cathedral!