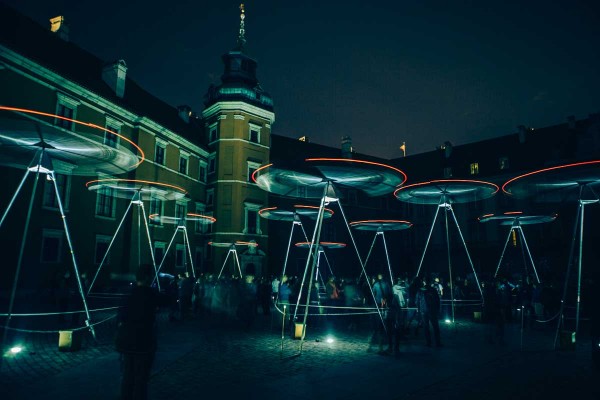 No! It’s a …erm…what exactly is this?

It looks like something from War of the Worlds and its sound has been described as a ‘pulsating harmonic drone’ – but ‘it’ remains a mystery for now. All will be revealed later this month when composer and sound artist Ray Lee gives a free, open lecture on his sound installation work: ‘Chorus’, followed by a performance of the piece itself.

It is all part of Coventry University’s annual INTIME symposium which takes place over the weekend of 24th and 25th October. The symposium looks at current practice in experimental music.

Ray Lee’s lecture takes place on Friday 23 October at 4.30pm in the Ellen Terry Building and this will be followed by two performances of ‘Chorus’ in University Square, one at 6pm and one at 8pm.

But what will the performance look and sound like?

Well, if you can imagine a series of giant metal tripods placed in University Square, each one supporting rotating arms towering above the audience and sending out a hypnotic siren call to all those present… you will have a good idea!

Towering above the audience a series of giant metal tripods support rotating arms. At the end of each arm loudspeakers emit precisely tuned musical pitches creating a pulsating, harmonic drone, singing out a hypnotic siren call to all those present. Chorus is a monumental sound installation by British composer of the year, Sonic Art 2012.

It may look and sound very ‘Dr Who-ish’ – the only thing missing will be the cyber men!

If you can’t make Friday’s performances, there are subsequent ones on Saturday 24th October at 1-3pm (continuous), 6pm and 7.30pm at the same venue.

You can buy tickets to full symposium here, however all the performances are free and open to the public so bring along your friends and family for a sound and vision experience of a lifetime!