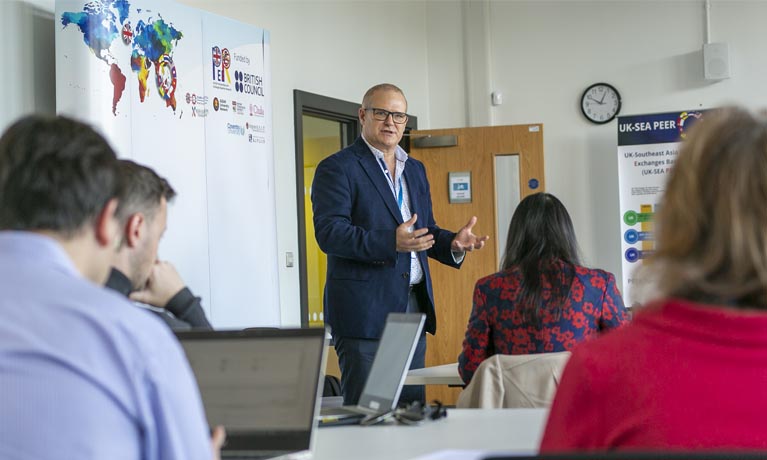 Funded by the British Council for 20 months, PEER is an international research project led by Coventry University’s Centre for Global Learning (GLEA), in partnership with four universities and three international organisations in Asia. *

PEER examines patterns and models of partnerships in transnational education (TNE), Research and Innovation (R&I), and Technical and Vocational Education and Training (TVET) between the UK and 15 East Asian countries in the past decade.

The aim of the project is to provide policy makers, funders and university leaders with reliable data and synthesised analysis to inform their policies for future partnerships that will bring equity, mutual benefits and added value to all involved.

Reflections on the PEER project

PEER has brought together a truly international team with diverse backgrounds and perspectives. Together we speak 12 Asian and European languages. We investigated multidimensional partnerships at a large scale and midst the pandemic by combining a significant volume of quantitative data and 30 case studies with nearly 100 interviews. We have mapped the landscape of East Asia-UK Partnerships in the past decade and developed deeper understanding of different institutional arrangements, principles, contexts, and actors that foster or weaken knowledge partnerships. We explored different meanings of ‘internationalisation’, ‘regionalisation’ and ‘globalisation’ in higher education” across countries.

The interdependence between the UK and other research systems, as evidenced by PEER, has increased in terms of research talent, resources and outcomes.

Between 2010 and November 2022, the UK published 2.7million research publications across all disciplines in Scopus of which 51% were with international co-authors. Major partners were the USA 24%, East Asia 21%, and Germany 12%. Many of these publications have been among the most influential works in their fields.

East Asia-UK research partnerships are shaped by funding mechanisms. British and Asian funders use the United Nations’ Sustainable Development Goals (SDGs) as an influential benchmark. Researchers use the SDGs as a hallmark too. However, not all goals are equally considered.

The 2021 PEER survey identified the three most frequently addressed SDGs in projects to be: SDG3 – Good Health and Well-being (40%), SDG9 – Industry, Innovation and Infrastructure (25%) and SDG11 – Sustainable Cities and Communities (22%).

Co-funded interdisciplinary partnerships have become a preferred model for greater co-creation of knowledge considered impactful and relevant to East Asia and the UK.

We were delighted to have Professor Richard Dashwood, Deputy Vice Chancellor for Research, to open the PEER Conference this October ‘Co-creating Alternative and Sustainable Futures of UK-East Asia Partnerships’.

“We are looking to solve some quite major global challenges and we need to have people coming from all sorts of different backgrounds to create that innovative space where we can solve really interesting, exciting things to change the world.”

UK transnational education (TNE) refers broadly to higher education programmes – from undergraduate to doctorate – provided entirely or partly outside the UK but leading to a UK award or a dual award.

East Asia was seen as a laboratory for developing various TNE models and the region has hosted the most UK TNE students and programmes since 2010. Professor Richard Wells, Pro-Vice Chancellor (International) will present the key findings of PEER at the ‘Going Global’ Conference in Singapore on 30 November 2022.

Between 2010 and 2020, the 15 East Asian countries have hosted 2.3 million UK TNE students, in comparison to 1.9 million East Asian students who studied in the UK. Malaysia has hosted the most UK TNE students, followed by China, Singapore, and Hongkong. Over 50% (or 117) of all UK higher education institutions have engaged in collaborative TNE partnerships with East Asia since 2010.

UK universities often see TNE as a way to establish their reputation overseas and diversify revenue. In many Asian countries, TNE is a way to privatise and internationalise their higher education sectors to meet domestic student demands, as in China and Vietnam. Some countries, such as Malaysia, Singapore and Hong Kong have become regional TNE Hubs attracting both domestic and international students.

The Covid pandemic has opened pandora’s box and accelerated the pace. The pandemic has forced things to happen very quickly, that otherwise could have taken many years. Sharing reflections at the PEER Roundtable Dialogue in October, Miss Jane Delfino, Doctoral candidate of the Dual Award PhD programme between the University of the Philippines and Reading University, said:

“Moving forward, I see a lot of potential in doing online and distance learning with the flexibility and adaptability demonstrated by both universities, while ensuring the quality of that education we are receiving.”

Despite a turbulent decade caused by Brexit and the Covid-pandemic, the UK has placed a priority on developing knowledge, skills and innovation with partners as part of the ‘Global Britain’ strategy. However, the success of ‘Global Britain’ depends not simply on the energy and resources the UK devotes to it but also on the participation of its partners.

Since 2021 the UK has become an ASEAN’s Dialogue Partner – a status that the United States, Australia, the European Union have already assumed. The UK and ASEAN are charting the areas and modalities of cooperation for the years to come.

“The PEER project is useful for us to map out, in the next few years, what particular higher education partnerships and initiatives at the policy and institutional levels we could do more to contribute to the UK-ASEAN Plan of Action.”

SEAMEO Centre for Vocational and Technical Education and Training, Brunei