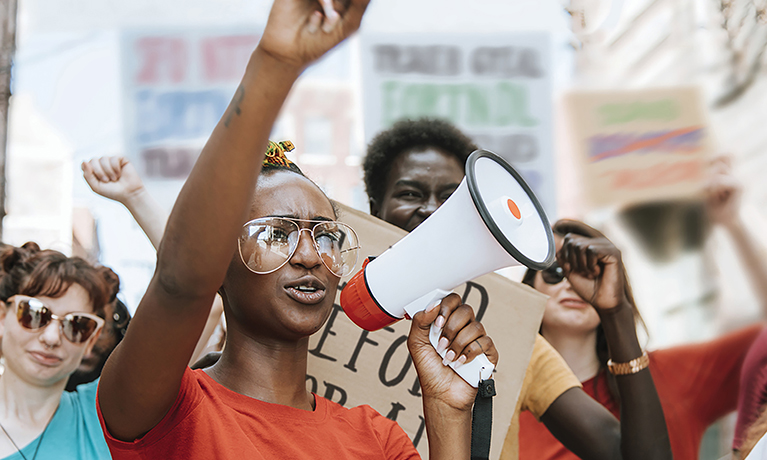 Professor Gordon Crawford (Centre for Trust, Peace and Social Relations) and Professor Abdul-Gafaru Abdulai (University of Ghana Business School) marked the publication of their edited Edward Elgar Handbook for Democracy and Development in a recent book launch event organised by CTPSR. The Handbook is the first in the new series by Edward Elgar on Development.

The Handbook for Democracy and Development explores and contributes to the controversial updates on the relationship between democracy and development, providing clarification on the interlinkages between political regime type and socio-economic development. The Handbook focuses on analysing the relationship between political regime types, and broader development indicators, the different chapters covering topics such as economic growth, inequality, poverty and human development, conflict, human rights and environmental sustainability. The contributors of the book examine these issues from multidisciplinary perspectives across Asia, Africa, Europe, Latin America and the Middle East.

The launch event kicked off by the editors highlighting the important contribution the Handbook brings to the existing debate. As they argued, the relationship between socio-economic development and political democracy is one of the most researched and debated topics in social sciences however, many of these debates remain unresolved. The Handbook aims to bring additional clarity to these complex debates.

As the editors presented during the launch event, three current issues make the book and its contribution even more pertinent. Firstly, the sharp rise in global inequalities that has become a major concern. Democratic electoral competition has been increasingly responsible for rising socio-economic inequalities. Secondly is the current disillusionment with democracy, which is associated with the rise of right-wing authoritarian populism. And lastly, is the issue of state capacity. Research has increasingly highlighted the significance of state capacity for development. Emerging literature on “political settlements” is considering how what matters more in shaping a country’s development is not just whether a country is democratic or autocratic but whether those in power feel secure enough to pursue long-term policies in the national interest.

The launch event heard from the contributors of the handbook, by presenting short videos on four themes around definitions and interlinkages, outcomes, impact on inequalities and regional and country perspectives. The authors reflected on questions such as how the two key concepts of democracy and development can be defined, has democracy tempered or intensified various forms of inequalities and what are the key issues concerning the relationship between democracy and development in specific regional contexts.  These videos can be watched in full on CTPSR’s Youtube channel.

You can also download for free the following three chapters of the book:

Abdul-Gafaru Abdulai & Gordon Crawford – Introduction to Research Handbook on Democracy and Development: an overview of the debates

You can purchase a copy of the book from Edward Elgar’s website or suggest to your library to order a copy.