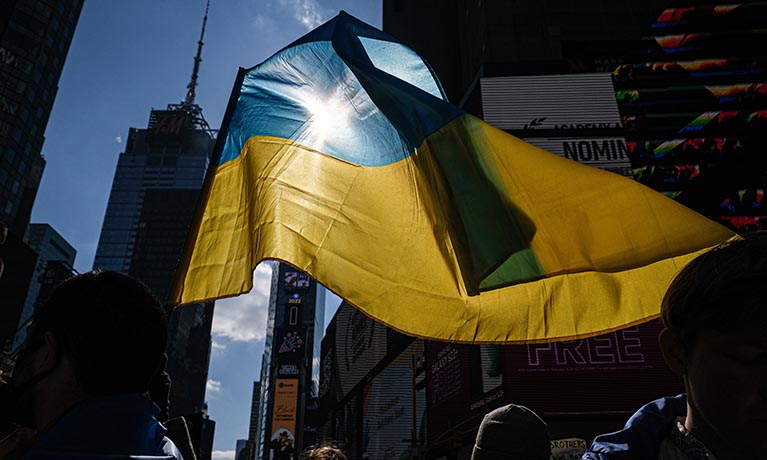 As the international community watches with mounting outrage the dramatic events unfolding in the wake of Putin’s invasion of Ukraine, many political and economic analysts, commentators and the general public, have been wondering whether the ‘economic warfare’ response of the western world can be effective in deterring further military action by Russia and help affirm democratic Ukraine’s sovereignty, independence and territorial integrity.

What is economic warfare?

The practice of ‘economic warfare’ is not new. In the form of blockades (preventing a country from receiving or sending out food, supplies, weapons, or communications, and sometimes people, by military force), it can be traced back to the Peloponnesian war fought between 431 and 405 BC in ancient Greece. But in modern times the term has evolved to include a number of additional economic and financial sanctions, as exemplified by those recently imposed by most western countries on Russia following Putin’s full-scale invasion of Ukraine on 24 February 2022.

Førland (1993, p. 151) defines economic warfare as “an intense, coercive disturbance of the economy of an adversary state, aimed at diminishing its power.” Unlike ‘military warfare’, which attacks the offending country’s military capabilities, economic warfare targets economic resources via ‘sanctions’ including, inter alia, trade embargoes (such as that attempted during the cold war by the USA and its allies to deny the then Soviet Union access to computers, telecommunications equipment, and other technologies of high economic and military value), boycotts, the freezing of foreign-based capital assets, the prohibition of investment and other capital flows, and expropriation. The aim of economic warfare is to weaken an adversary’s economy by limiting access to necessary physical, financial, and technological resources thereby inhibiting its ability to benefit from trade, financial, and technological exchanges with the international community (www.britannica.com/topic/economic-warfare).

Critics of economic warfare have argued that in addition to the fact that economic isolation can reinforce ideologues and rogue states, it often imposes greater costs on the general population of the offending country (causing rationing, starvation, the spread of disease, etc.) than it does on its political or military elite. Furthermore, it imposes non-trivial costs on the sanctioning country or countries, which explains the reluctance of some western European countries to fully stop the purchase of oil and gas from Russia given their significant dependence on Russian energy supply. But this is probably the next step in the escalation of the economic sanctions by the West, including EU countries, in an effort to oppose Russia’s war through any means short of a direct military involvement in Ukraine.

Førland (1993) also points out that the effectiveness of economic warfare is limited by the ability of the adversary’s government to redistribute enough domestic wealth toward the military in spite of the sanctions. The economic warfare against North Korea in the 1990s is a case in point in so far as it did not significantly reduce the military threat posed by North Korea because it managed to direct its limited economic resources toward its militaries.

In an article in The Guardian, Nicholas Mulder (20 January 2022) suggests that even John Maynard Keynes in an unpublished 1924 letter to the League of Nations, urged sanctions supporters to focus on providing “positive assistance to the injured party” such as logistical and financial aid to countries under attack “as compared with reprisals against the aggressor” through punitive economic sanctions, which – according to Keynes – “would always run the risk of not being efficacious” (cited in Mulder, 2022). History tells us that Keynes’ recommendations went on deaf ears. The League of Nations’ sanctions failed to stop Mussolini’s invasion and occupation of Ethiopia. Similarly, Cuba has suffered harsh US sanctions since the 1950s, but they failed to oust Fidel Castro from power in Cuba (also thanks to the increased trade between Cuba and Mexico, Canada, and western Europe) and the regime there has not changed.

Earlier literature’s verdict on the effectiveness of economic warfare

Few scholars have dealt with the specific question of the effectiveness of economic warfare. Baldwin’s (1985) comparative analysis of economic sanctions (unaccompanied by military intervention) leads him to inconclusive findings. On the other hand, Medlicott (1959) notes that the impact of economic sanctions, particularly with reference to trade embargoes, is mostly dependent on the specific circumstances of the blockaded power. An island power with limited indigenous resources to achieve self-sufficiency or limited ability to acquire resources from other countries would obviously suffer considerably more than vast continental powers with greater potential capacity for self-sufficiency.

Alford (1967) highlights the relative impotence of economic warfare in achieving a policy U-Turn, unless the sanctions trigger a revolution ousting the old government in the offending country. Yet, the resistance of the ruling elite to stay in power – aided by the totalitarian control of the armed forces – means that a successful revolution is unlikely. In such circumstances, severe economic warfare may merely lead to much civilian suffering without achieving the aspired policy change. This is precisely what happened after the United Nations imposed a tighter and tighter economic blockade on Iraq following Iraq’s invasion of Kuwait in August 1990. Although the Iraqi population suffered enormously, Saddam Hussein refused to change his stance, pushing UN forces to wage (military) war on Iraq in January 1991. In essence, when economic sanctions hurt a population of a totalitarian (non-democratic) country, they have little impact on the power elite and little chance of subverting the regime.

What is ‘new’ about the economic warfare package against Russia?

An important caveat on the effectiveness of economic warfare is in order at this point. Much of what has been written in the relatively scant literature cited above on the efficacy of international economic sanctions inevitably refers to historical verdicts on whether economic warfare measures employed in the past have worked. However, such contributions fall short of answering the more pressing question of whether the current, unprecedented economic weapons deployed by most of the western world (most notably the US, EU, UK and Canada but also other countries such as Japan, South Korea, and Australia) against Russia – on a scale never seen before – will work. To attempt to answer this question, it is necessary to take a closer look at the heavy package of new sanctions deployed against the Russian economy. The main target of the package is Russia’s banking system through two particularly heavy measures:

Although the exclusion of Russian banks from SWIFT leads, by itself, to a highly damaging financial isolation, it is the combination of this and other measures with the limits imposed on Russia’s central bank to tap into its foreign currency reserves that makes the overall economic sanctions package one of the most significant geo-economic manoeuvres in history, one which, over time, could indeed lead to a full economic meltdown of the Russian economy akin to that witnessed in the early 1990s when the entire Soviet financial system collapsed.

Significantly, this economic warfare package also demonstrates an international unity and resolve from the West in particular, that has not been seen since World War II.

Russia’s economic lifeline currently lies on earning foreign currency from the sale of oil and gas and, rather oddly, eight days into the conflict, much of Europe continues to buy Russia’s greatest assets in abundance. European countries (including Germany, Italy, the Netherlands, Poland, Finland, Lithuania, Romania and Bulgaria) import about half of Russia’s oil exports (approximately 2.5 million barrels per day) via Belarus (Jaffe, 2022). As far as imports of natural gas from Russia are concerned (which are more difficult to re-source from alternative suppliers), last year alone the EU imported about 45% of its gas from Russia, close to 40% of the EU total gas consumption. But a prolonged war in, and/or occupation of Ukraine, would most certainly force western countries still heavily reliant on Russian’s energy supply, especially gas (Hungary, Czech Republic, Germany and Italy in particular), to be prepared to sustain whatever costs they could possibly endure in order to prevent these energy funds to continue to help Russia maintain its belligerent stance.

Although economic sanctions had been to a large extent dismissed for decades as ineffective, the new, smarter financial weapons in economic warfare could prove a very important tool to help de-escalate military action. Much of the effectiveness of economic warfare in defusing conflict in Ukraine seems now likely to be dependent upon the decision to strengthen even further the economic sanctions on Russia by closing off the taps.

economic sanctions. His alternative is worth considering. Available at: https://www.theguardian.com/commentisfree/2022/jan/20/keynes-warned-the-world-against-using-economic-sanctions-his-alternative-is-worth-considering