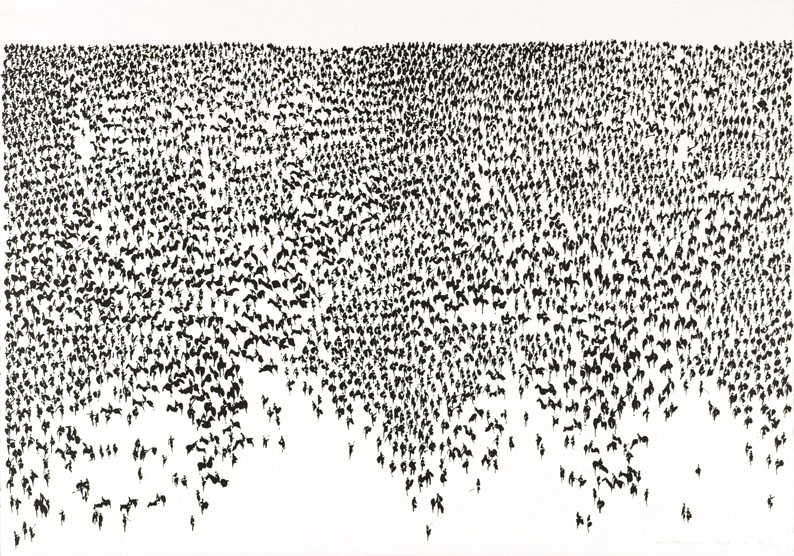 By Professor Ralph Kenna, Centre for Fluid and Complex Systems

The most famous story in Irish mythology is Táin Bó Cúailnge – the Cattle Raid of Cooley. It’s about a war between Connacht in the west of Ireland and Ulster in the north. When the Connacht army attacks, the men of Ulster are out of commission due to a curse to which only their hero Cúchulainn is immune. Cúchulainn takes on the Connacht men one by one and gains the status of Ireland’s most famous hero.

But there are other stories and other heroes in Irish mythology. One such story is Táin Bó Fraích – the Raid of Fráoch’s cattle. It is named for Fráoch – the “most handsome warrior” in Ireland.

Fráoch’s story is a bit of an enigma because its first part is set before the raid on Ulster, in which our handsome hero is killed. The second part occurs much later and Fráoch is still alive!

So, what is going on and what can network science tell us about the puzzle?

Well, Cúchulainn’s story begins in Rathcroghan in Connacht where the king and queen are chatting in bed. It turns out that their wealth is matched in every way but one – King Ailill has a magical white bull that Queen Medb cannot equal. Only Ulster has a bull of comparable quality – a brown one. So Medb raises an army to take the brown bull by force. Louis le Brocquy’s famous drawing The Táin. Army massing illustrates the build up to this quintessential war.

Fráoch appears briefly in Cúchulainn’s story as a worthy opponent of the Ulster hero. Even though he reluctantly kills Fráoch, Cúchulainn is unable to stop Medb from capturing the brown bull. On return to Connacht, the brown bull fights the white bull, and both perish.

This tragic tale is preceded by Fráoch’s own story- The Raid of Fráoch’s Cattle, which also begins at Rathcroghan. In the first part, Fráoch asks Ailill and Medb for their daughter’s hand in marriage. He can’t pay the dowry they demand so he proposes to elope. Ailill and Medb trick him to swim in a lake where a monster attacks him. He is rescued by his lover and the supernatural powers of “three times fifty” maidens. Ailill and Medb eventually agree to the marriage – but only if Fráoch joins in the forthcoming attack on Ulster. And thus Fráoch enters Cúchulainn’s story to seemingly meet his end.

In the second part of his eponymous tale, however, Fráoch is alive again and, with a small band of heroes, journeys via Scotland and “north Saxon-land” to the Alps, north of Lombardy to the land of the “Long-Beards”. There, he searches for his wife, three sons and cattle, who had been carried off by plunderers. He succeeds in his mission and returns to Ireland to fulfil his promise and join Connacht’s attack on Ulster.

Now, new research brings together mathematicians at Coventry and Limerick Universities with archaeologists at Rathcroghan Visitor Centre. The team maps out hundreds of characters in Cúchulainn’s story and over a thousand linkages between them. It does likewise, albeit on a smaller scale, for Fráoch’s story. The researchers then compares the interactivity of the social networks in each text to the other and how the two parts of Fráoch’s tale stand up.

They conclude that, despite their different sizes, Cúchulainn’s story and the first part of Fráoch‘s story have very similar network structures. This is not the case for the second part. This bolsters antiquarian Arthur Leahy who, in 1906, suggested there were two medieval scribes who recorded Fráoch’s tale, one of whom embellished the second part, adding geographical and historical knowledge of the time it was set to writing. Thus medieval mischief is the source of the mystery.

In a twist to the academic paper, and to promote the collaborative aims of art, humanities and mathematics, seven prizes are up for grabs for guesses of how many characters are in le Brocquy’s famous drawing. The competition is open for a year and a day after the date of publication of the paper. To read the paper and find out about network science, Irish mythology, and details of how to enter the draw, you can freely download it here: https://doi.org/10.1142/S0219525922400069.