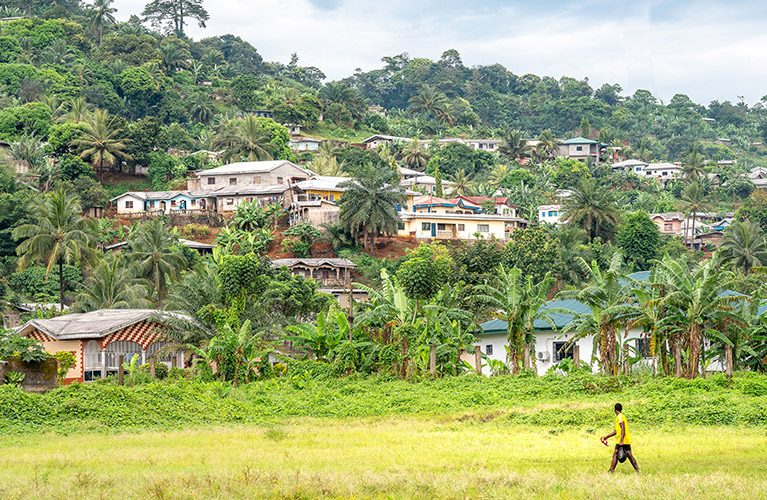 Cameroon has experienced a pronounced political crisis known as the “Anglophone” conflict for over six years. The recently published “Voices from Ground Zero” report highlights the experiences and perspectives of those most-affected by this conflict in bilingual Cameroon. It does so by giving voice to those civilians who remain in the conflict zones, known locally as ‘ground zero’, as well as those forced to flee their homes as internally displaced persons.

The ‘Anglophone’ conflict is an internationally neglected civil war and displacement crisis (Norwegian Refugee Council 2019 & 2020). The conflict is between government security forces and armed separatist groups calling for an independent state of Ambazonia in the two Anglophone regions of South-West and North-West Cameroon, the former British Southern Cameroons. The current conflict commenced in late 2016 with peaceful protests by lawyers and teachers against the ever-increasing appointment of French-speaking judges and teachers that were undermining the distinctive English legal and education systems.

Government repression of the protests, along with the banning of civil society organisations advocating for federalism, led to secessionist voices taking centre stage and the emergence of armed separatist groups in 2017. Armed conflict ensued after the declaration of the independent Republic of Ambazonia on 1 October 2017 by the separatist groups, alongside massive demonstrations of support, which led to the occupation of the two regions by the Cameroonian military. However it is the civilian population in the Anglophone regions, especially in the rural areas, that has borne the brunt of the conflict, with over 4,000 people killed and hundreds of villages destroyed CHRDA 2021, while 1.1 million have been internally displaced out of a total population of approximately four million (UN OCHA, 2021: 18) and a further 60,000 refugees in Nigeria (UNHCR, 2020).

Human rights reports document killings, rape, arbitrary arrest, kidnappings, torture and unlawful imprisonment (CHRDA 2021; CHRDA and Raoul Wallenberg Centre for Human Rights, 2019; Willis et al., 2019; Willis et al., 2020). The incidence of rape, mass rape and other forms of sexual violence against women and girls is shocking, described by the UN as ‘pervasive’ and ‘rampant’ (Craig 2021). While human rights violations have undoubtedly been perpetrated by both warring sides, evidence indicates that the security forces are responsible for a majority of the killings and burning of homes, and for a greater level of indiscriminate violence (Willis et al., 2020: 35-36).

Prospects for conflict resolution and a just peace are currently at an impasse. The Government of Cameroon appears intent on a military solution with little interest in dialogue or negotiation. The one public attempt at dialogue – the government-organised Major National Dialogue from 30 September to 4 October 2019 – was criticised for being elite-oriented and for excluding key actors, both separatist groups and civil society actors (Hendricks and Ngah, 2019; Köpp, 2019). Some analysts doubted the sincerity of the government (International Crisis Group 2020; Willis et al. 2020 ), with the military crackdown in the Anglophone regions intensifying immediately afterwards (Dupuis 2019).

The one international attempt to mediate peace talks – the so-called ‘Swiss Initiative’ by the Swiss Government in March 2019 – has made virtually no progress in bringing the warring parties together. A number of Western governments have rhetorically expressed their support for the Swiss initiative but have done nothing to assist the process or put pressure on the Cameroon government, and thus are accused of using it as a smokescreen to conceal their disinterest and neglect of the conflict.

The root causes of conflict can be traced to the colonial history, a botched process of decolonisation in 1961, and subsequent  post-independence constitutional changes  by the francophone-dominated Government. The latter changes entailed the shift in 1972 from the federal state agreed at reunification in 1961 to a unitary state, and then the renaming of the country by presidential decree in 1984 from the United Republic of Cameroon to La Republique du Cameroun, thereby reinstating the name adopted at independence of French Cameroun on 1 January 1960, before reunification with the former British Southern Cameroons on 1 October 1961. Anglophone opposition to the Francophone-dominated state and its assimilation policies, including calls for a return to federalism, was expressed repeatedly in the 1980s and 1990s, but by non-violent means.

The various forms of marginalisation experienced by the Anglophone population – political, linguistic, socio-economic, and socio-cultural – were articulated by the research participants. Such grievances came to a head in late 2016 with the lawyers’ and teachers’ strikes and demonstrations, with state repression of these leading directly to calls for secession and the unprecedented violence that has been ongoing to date.

The impact on affected populations has been huge. Many participants gave direct and indirect accounts of experiences of extreme violence. Individuals and communities have been subjected to gross human rights violations, sexual and gender-based violence (SGBV), mass displacements, mental trauma, loss of income and livelihoods, the breakdown of social cohesion and heightened insecurity and crimes. Women, children, youth, elderly, and persons with disability are among the civilian groups adversely affected by the conflict. SGBV against women has become endemic, not only perpetrated by combatants as a weapon of war, but also violence experienced in domestic situations has spiked, with displaced women and girls often sexually exploited in overcrowded living conditions or through being forced into prostitution.

Participants noted the failed attempts to resolve the crisis. In terms of a potential pathway to peace, the majority of participants focused on a ceasefire and military withdrawal as the first step, along with the release of political prisoners. Equally, an inclusive dialogue which brings together all relevant stakeholders and actors was almost unanimously emphasised as a crucial strategy for peace. In addition, a bottom-up approach was advocated that facilitated local people’s participation in processes of consultation and dialogue from the grassroots upwards to the national level. A role for outside mediation, especially from the AU and UN, was also acknowledged.

To ascertain the future political structure supported by the majority Anglophone population, a referendum was recommended, inclusive of choices of federation or secession. If the federal option prevailed, then language equality and bilingualism was noted as key to mutually respectful and peaceful co-existence. The role of women, youth, local civil society organisations (CSOs) and non-government organisations (NGOs) was noted as critical in initiating peace and humanitarian activities amidst the limited support from the state and international community.

Participants also acknowledged that finding just solutions to the conflict is challenging and complex. The intransigence of the warring factions, the near lack of political will on the part of government, the self-perpetuating cycle of violence and the development of a war economy, were highlighted as some of the challenges to conflict resolution

Conflicts are routinely dominated by elite actors, who often remain at a distance from the realities of war and its impacts. The Anglophone conflict in Cameroon is no different. Key actors include the Francophone-dominated government, the military, and the Anglophone separatist leadership largely based in the diaspora, as well as in prison. The voices of those civilians directly affected by war and violence are heard much less frequently. This report, in the context of the current Anglophone conflict, aims to redress that neglect and to place their experiences and perspectives at the heart of attempts to achieve peace with justice.

You can download the full report by clicking here.

Gordon Crawford is a research professor in Global Development.

Nancy Annan is a research fellow with focus on peace, conflict, global development, and gender.

Kiwoh Terence Nsai holds a PhD in Sociolinguistics with interests in Identity, language policy and peacebuilding.

Albert Mbiatem is a Lecturer of Conflict Resolution and International Relations.

Zoneziwoh Mbondgulo-Wondieh is an award-winning feminist, humanitarian storyteller, and researcher with over ten years of experience in gender and digital activism, movement building, policy advocacy and youth leadership.

Atim Evenye Niger-Thomas is a Humanitarian Development and Peace Practitioner.

Sakah Bernard Nsaizdedze is a researcher, peacebuilding, governance, gender, and development consultant with over 10 years experiences.

Gaby Ambo is a Consultant on Human Rights.