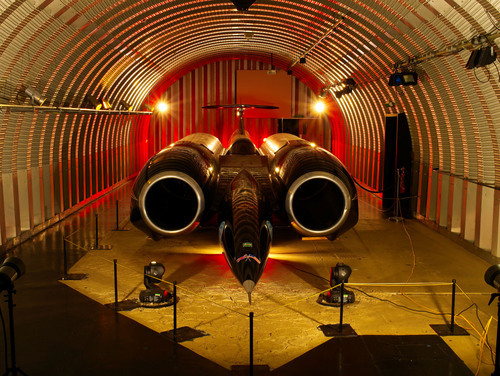 If you have a long break during the day and are looking for something to do to fill it up, Kirsty has come up with 23 very good reasons for why you should visit the Coventry Transport Museum…

Cars! And lots of them. From the earliest Morris ones to the latest Jaguar concept. Open every day with free admission! What’s not to love about that?

Very first amateur motorcycle race was held in Coventry in 1899, and if you’re a fan of motorbikes there’s plenty on show at the museum!

Easy to get to. It’s right in the centre of town, next to Pool Meadow bus station.

Not everything is focused on transport. There’s one section of the museum that talks about Coventry City Football Club’s FA Cup win in 1987 for which they used a converted bus to parade the trophy in!

Thrust 2 is on show at the museum. This car once held the land speed record. It reached 633mph in Nevada, USA 1983. Round the world. There’s a motorbike on show that one gentleman drove around the world on in 4 years. At the museum you can see the map of his epic journey.

“You’re only supposed to blow the bloody doors off!” A lot of people don’t know, but the famous sewer pipe scene from The Italian Job (1969) was actually filmed in Coventry! You can find out more at the museum. Ring road. You can’t come to Coventry and not hear the horrors of its notorious ring road. There’s lots of information at the museum on the project that began in 1959, and was finally completed in 1974.

And did you know the London 2012 Olympic torch was made in Coventry? It’s on show in the museum.

New York City. You could reach the big apple in 340 minutes if you left Coventry in the Thrust 2. It really is worth going to see this previous land speed record holder!

Simulator. For £1.50 (and if you’re brave enough), you can climb into the simulator and experience what it would be like to be at the wheel of the Thrust SSC.

Penny-farthing. You know those funny bikes with one massive wheel? They have those on show too!

Opportunity to learn about the history of Coventry. There’s one particular section of the museum dedicated to the Blitz. This is a very interesting if somewhat saddening experience. Rare pieces. Some of the cars/bikes/motorcycles on show you’ll never get chance to see anywhere else.

TAXIIII! You know those lovely black cabs? They’re made in Coventry too and they’re also on show.

Music to your ears. If you love nothing more than the sound of a revving engine, there’s a section of the museum that allows you to push buttons to hear the sound of a tiny engine all the way up to a V12.

Unique. It’s not like every city has a transport museum.

Scared your bus might fall over? Fear not, the transport museum will show you the “tilt test” which ensures you’re always going to be safe on that double decker round Cov.

Elephants. The Thrust SSC which currently holds the land speed record weighs more than a family of elephants! There’s stacks of these fun facts around the museum.

Useful. If you’re studying or thinking about studying engineering, you might find some useful information at the museum.

Must see. It’s free, it’s open every day and in my opinion even if you visit just the once, it’s a must-see.