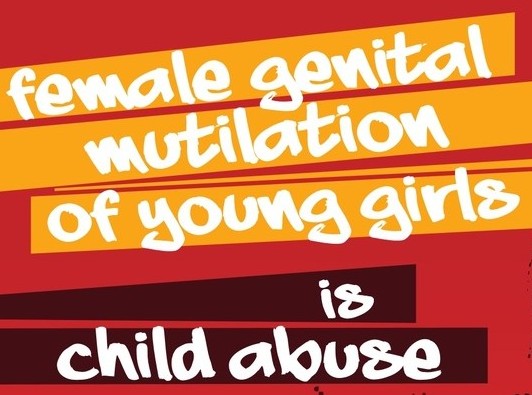 Now, imagine these ‘improvements’ taking place against your will. Imagine a world where somebody else not only has a say in how your body should look and work, but believes they have the ‘right’ to make the changes they see fit – with a complete disregard for your mental and physical health. Imagine a world where this is deemed acceptable, where it is actively encouraged, where human beings are left in devastating pain, after being abused and stripped of their human rights.

You are in that world.

FGM stands for Female Genital Mutilation, more commonly known as Female Genital Cutting. The practice involves the alteration of, or injury to, the female genital area for non-medical reasons.

“[..]About 140 million women and girls worldwide are subject to Female genital cutting. Mainly in 28 countries in Africa, but also further afield. […] It is a practice which is a human rights abuse, but also has devastating health impacts on girls and women, both physical and mental impacts on them. The world health organisation called for the elimination of FGM over 30 years ago, and still the numbers increase.”
Professor Hazel Barrett, Coventry University.

FGM is not exclusively international, It’s estimated that there are over 500,000 recorded incidences in Europe, with 60,000 happening here in the UK. Female genital mutilation (FGM) is an umbrella term for procedures that intentionally alter or cause injury to the female genital organs for non-medical reasons. This can include deliberate injury to a girl or woman’s genitalia, and the removal of all, or parts of, the external area. Where the procedure is taking place in rural areas it can often be carried out with unsanitised equipment; including knives, scissors, pieces of glass and razor blades. With no anaesthetic available girls are often forcibly restrained.

“Procedures are mostly carried out on young girls sometime between infancy and age 15, and occasionally on adult women. FGM has no health benefits, and it harms girls and women in many ways. It involves removing and damaging healthy and normal female genital tissue, and interferes with the natural functions of girls’ and women’s bodies.

Why does it happen?

FGM is not done for medical reasons, there is no justifiable medical need for these girls to be attacked. The practice is undertaken due to beliefs regarding ‘proper sexual behaviour’, ‘premarital virginity’ and ‘marital fidelity’. In many communities FGM is believed to ‘help’ women resist illicit sexual acts, by reducing her libido:

“When a vaginal opening is covered or narrowed, the fear of the pain of opening it, and the fear that this will be found out, is expected to further discourage “illicit” sexual intercourse” (WHO)

Research shows that FGM and FGC is often defended as a ‘rite of passage’, from childhood to womanhood. It is usually performed on girls aged from 0 – 15 years, but can also be carried out on adult women. Why hasn’t it been stopped?

FGM is so rife within tight-knit communities, behind closed doors, that it is so far proving difficult to stop indefinitely. For example, the practice is illegal in the UK, where it has been against the law for over 20 years, there have been no prosecutions over FGM in the country since, yet we know hundreds of new cases are identified every month. (BBC)

In 2012 the UN General Assembly classed FGM as a violation of human rights; They approved a resolution calling for the practice to banned across the EU. Finally, they declared February 6th (tomorrow) to be the official International Day of Zero Tolerance for Female Genital Mutilation.

However, before we can hope to eradicate this cruelty forever, we need more information:

“Despite campaigns to explain to communities the health implications of [FGM] and the criminalisation of the practice in many countries, FGM has continued. The link between social structures and gender power relations and sexuality mean it’s very resistant to change. The failure to conform can affect how well a girl marries and her family’s standing. Turning against it can lead to social exclusion, ostracism or even violence. Family honour and social expectations play a powerful role in perpetuating FGM, making it extremely difficult for individual families, as well as individual girls and women, to stop the practice on their own.” Hazel Barrett speaking to The Conversation. What can we do now?

“To tackle the problem we need not just to change the behaviour of individual people, for example those doing the cutting, but tackle wider issues concerning the beliefs held by the community that perpetuate the practice, making it ‘normal’.

Understanding more about [FGM] and taking new approaches to change individual and community behaviour will push us towards the tipping point that we need – when communities accept that FGM is no longer necessary or acceptable and individuals (parents and children) have the power to say no”. Professor Hazel Barrett.

Coventry University’s Professor Hazel Barrett leads the pioneering ‘Replace’ projects. ‘Replace 1’ was a research project that aimed to get into the heart of FGM communities and discover the social and cultural reasoning behind the practice. Replace 2 is the second stage, evaluating these findings and therefore improving understanding of FGM, why it happens and how it can first be controlled, then eradicated fully. Eventually Hazel hopes that Replace 2 will be able to publish educational information and produce free training materials that will be accessible online, to be shared with communities across Europe. “This is a very sensitive topic, politically very difficult to deal with, but we are hoping that our approach, which is very community based, […]will be an acceptable way for other countries outside the EU to […] approach to work towards ending FGM globally.” Professor Hazel Barrett speaking to Coventry University.

Update: Hazel Barrett’s article has now been selected as the Huffington Post’s ‘Editor’s Pick’, please take the time the read it here. Hazel also wrote an article for The Independent, covering the recent first prosecution under the 2003 FGM act.