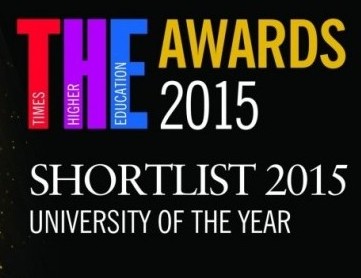 Your favourite university has been shortlisted for the Times Higher Education ‘University of the year 2015’ award!

We are the only modern university to be nominated this year, shortlisted alongside five other universities from across the UK.

Now in their 11th year, the awards are designed to highlight the ‘talent, dedication and innovation‘ of the people behind the success of higher education in the UK. From great teachers to innovative research breakthroughs, the awards categories are vast; ensuring every aspect of the higher education sector is covered.

However, it cannot be denied that the biggest award of the night is ‘University of the year’. This monumental accolade is awarded to the institution that has ‘demonstrated exceptional performance in the past academic year‘ including ‘evidence of bold, imaginative and innovative initiatives‘.

As you know, Coventry University is rapidly going from strength to strength. We received the ‘Modern University of the Year’ accolade in the last two ‘Times and Sunday Times Good University Guides’, and have watched our performance in individual categories soar up the league tables.  With this strong performance behind us, a brand new Science and Health Building opening in 2016, and our revolutionary faculty restructure this year, unCOVered believes that Coventry University absolutely deserves to take the Oscar for University of the year – 2015. It’s an excellent achievement for Coventry University to be shortlisted for the Times Higher Education’s ‘University of the Year’ award amongst such strong competition in the sector. It’s also a testament to our impressive forward momentum both at home, and in a global context, that Coventry continues to be recognised in this way within the industry and also outside it, and we remain hopeful and confident that November’s awards ceremony will bring further good news for our staff and students.”

The achievements of our universities, which transform students’ lives and carry out pioneering research day in, day out, deserve to be recognised, and over the last decade the Times Higher Education Awards have become one of the sector’s most hotly anticipated events. This year, the 11th year of the awards, we had more entries than ever before, and are delighted to have such strong shortlists, highlighting the strength of universities the length and breadth of the country.”