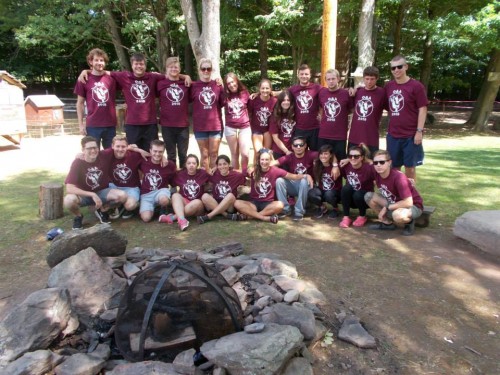 You may recognise Owen from such posts as ‘The summer of a lifetime‘, where he told unCOVered about his exciting summer plans. Thanks to a generous grant from our Centre for Global Engagement, Owen was able to fulfil his dream of working in the USA by joining Camp Leaders, the American summer camp organisation.

Well, now Owen is back – and if you’ve ever wondered what it’s like to work at a kids summer camp, this is the post for you. Owen has shared his (jam-packed) itinerary with us to give you an idea of a standard camp leader day. Prepare to feel exhausted by the end….!

07:15: The worst time of the day; the time reveille usually goes off – a sound that gives you nightmares (well, almost). At the sound of these military horns it’s time for myself and the other counselors to get up and start waking the kids. We have 30 minutes to be up and ready for line–up. This is no easy task. Myself and 8 other counselors have 27 kids to look after.

07:40: The majority of the kids are now out of bed, however the same few still aren’t. Cue much shouting, banging and other incentives to get them out of bed. They are finally up and moaning they can’t find their blue camp top or the multi-coloured sock they threw at someone two weeks ago.

07:45: Line-up time. Everyone from the Boys camp had to attend the front of the Boys Head Counselors cabin where he would share any announcements for the day, let us know anything unusual and also carry out his usual American sport quiz (a quiz that not once did I get the right answer for).

07:55: After our update for the day, we attended the grassy hill outside of the dining hall where the raising of the flag would take place. You soon learn that at camp, everything is traditional and patriotic. My kids, being the oldest at camp, would take great pleasure every morning and evening in raising and lowering the flag.

08:00: Time to enter the dining hall and stand by our tables. We had assigned tables so there was no rushing for the best seats! We then have to stand behind our chairs, and say the Jewish prayer before eating. The majority of the campers are Jewish so, although it is not a religious camp, we say the prayer before all meals.

08:05: Time to sit down and eat the breakfast. Food was a bit like a lottery; sometimes it was almost the best American meal you have eaten, other times you wouldn’t feed it to your dog! So my breakfast usually consisted of some cereal and some toast.

08:45: Everyone has now finished their breakfast and we wait for more announcements in the dining hall before leaving. At the sound of the music (whatever song the owner chooses), we are allowed to leave. Then it’s back to the cabin for clean-up!

08:50: One of the benefits  of having the oldest kids is that they are the only campers that are allowed to bring their own TV’s, xbox’s and Playstations. It was a challenge getting the kids to clean rather play on their games consoles, but we eventually used this in our favour. As they had this privilege, we’d threaten to confiscate their games for the day if they didn’t clean! It worked a treat and after about one week, every single morning the cabin was spotless in about 10 minutes.

09:20: As a specialist counselor, this is the point where I leave my kids, I will see them again at lunchtime. It’s time for me to head off to the Outdoor and Adventure section of the camp. We had to set up the climbing wall, zip line, rope course, tree house, bikes, archery or anything else the camp team were scheduled to do that day.

09:30: We get to meet all campers, boys and girls. This also meant that we had to change the way we communicated with people an awful lot. Thankfully it was the job of the general counselors to remind us of the kids names (with 500 kids on camp – I only remembered a few names). With the younger kids it was quite easy to discretely find out their names. The General Counselors would say things like ‘Jessica, it’s your turn next’ or ‘Are you going to be quick up this wall Dylan?’ With the older kids, they’d realise this tactic and constantly ask ‘Owen, what’s my name?’ I’d just have to blag it most of the time!

12:07: After the morning’s activities, American Pie by Don McLean would start playing. At the end of the song, the kids were allowed to enter the dining hall. This would give us just five minutes to make the abandoned equipment secure.

12:15: Lunchtime and I am back with my kids. They all want to update me on their morning. What they did , who fell over and who scored an own goal.

13:00: Lunch has finished and again, upon the sound of the music, we are able to go back to our cabins for ‘rest hour’. This is literally what it says on the tin – around one hour to sit back, relax or do whatever you want. The counselors could relax too but we were still on duty so we couldn’t really sleep!

13:55: Back to the Outdoor and Adventure area to set up for afternoon activities. Different groups would be scheduled for the afternoon which meant sometimes instead of doing the climbing wall and zip line, we might move over to the high ropes courses or Jacobs ladder.  We’d also change the activities around too – this meant my days weren’t too repetitive. There were advantages and disadvantages to each area/activity but all 21 of us were qualified to do every part, so we would decide each morning and afternoon who would go where.

17:00: This meant the end of afternoon activities and the start of ‘Shower hour’. This would be the only time of the day that the kids were able to shower. You soon learn that camp isn’t a place to look your best all the time – it can get very warm and sweaty!

17:50: We would once again line up outside the Boys Head Counselors cabin where he would give any announcements for evening activities.

17:55: Time to head to the grassy hill outside the dining hall again where lowering of the flag would take place.

18:00: After the prayer, it would be time for dinner. We were served by ‘Leaders in Training’ who are all ex-campers but too young to be counselors. Once again, dinner was hit and miss. However if you had ‘chicken patties’ or anything else nice, we would enforce a ‘drop and go’ policy. We would quickly put all the food on a spare plate and give the empty bowl back to return to the kitchen for seconds, thirds and fourths. It’s a tricky business but if you don’t do this, it means there’ll be none left for your table and if you want seconds you’ll end up with whatever they can fry in 1 minute. This usually isn’t a nice option….

19:00: After announcements in the dining hall, it would be back to the cabin to get ready for the evening activity. This can be anything from treasure hunts to talent shows and, occasionally performers.

19:30: Tonight is the night of a hypnotist that the camp have hired. The amphitheater is where tonight’s show will take place. Another benefit of being with the oldest campers is that while everyone else had to sit down on the grass (on raised levels so you could still see) we were able to bring deck chairs and sit at the back.

21:00: Shows finish as it’s time for the younger campers to go back to their cabins and get ready for bed. Upper camp, which are the three oldest groups, then had an activity called ‘Under the lights’. This was basically a chance for all the boys and girls to chat with each other and play games like basketball or tennis. The job of the counselors here was just to supervise and be there for any issues, so it was a great chance for us to have a chat together – out of the kids earshot.

23:00: We were always the last campers to leave ‘Under the lights’. We would return to the cabin where we’d have a reflection of the days activities, this was a chance for the kids to raise any issues.

It’s an extremely busy and exhausting job but I’m glad I did it and I wouldn’t change one minute of it. I’d also recommend that anyone who doesn’t mind working with kids and wants to explore a different culture and country do this, hands down. If time allows after university, I’ll be going back!