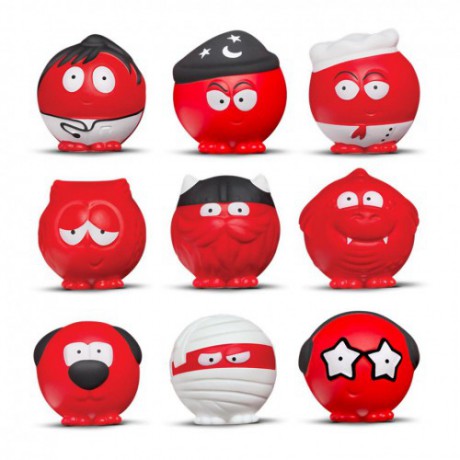 Every 2 years, the people of the UK come together and support the amazing charity that is Comic Relief, culminating in their flagship event, Red Nose Day! As today is the big day, we thought we’d give you the lowdown on what it’s all about and how you can get involved with fundraising. From the mind of writer Richard Curtis and comedian Lenny Henry, the Comic Relief charity was founded in 1985 (Christmas Day in fact), inspired greatly by the success of Live Aid earlier that same year. The focus of the project is to help those less fortunate than us, by founding and supporting projects in the UK and Africa. ‘Red Nose Day’ is their main fundraising event which takes place every 2 years, which includes a mammoth telethon featuring stars of music, stage and screen making fools of themselves and also creating some highly emotional and hard hitting films.
32 years on from the 1st event, and the charity is bigger and better than ever. The charity is now seen as somewhat of a national treasure, and something that really seems to bring the country together, by basically selling stuff and doing silly, crazy things! The total money raised from fundraising has already surpassed the 1 BILLION POUND mark, which is just incredible!
Since 2002 we have also had Sport Relief, but I won’t confuse things further with that one!

Why the Red Nose?

Inspired by the classic circus clown’s red nose, this has now become the most iconic symbol of Comic Relief. The 1st ‘Red Nose’ was sold in 1988, and they have since undergone various transformations!

Each Comic Relief has a different theme or tagline, and this year’s is that they are focusing on “Making Your Laugh Matter” by making the big day funnier than ever! The Comic Relief TV coverage is always full of special shows, sketches and features (remember James Corden’s legendary Smithy?), and this year they really seem to be pulling out all the stops… see!

The ways in which money is raised has also become more and more inventive/bonkers over the years, with celebrities in particular pushing themselves to the limit and undertaking some crazy challenges to help raise money. So far this year we’ve had Radio 1’s Scott and Chris carry out a live 24 HOUR Lol-athon broadcast, DJ Sara Cox has danced to classic tunes for 24 hours, and 6 celebrities embarked on “The Red Nose Convoy” – a treacherous road trip from Kenya to Uganda to deliver vital supplies to Red Nose Day funded projects.

What can I do?

There are so many ways in which you can help raise money for Comic Relief, and in their eyes, the crazier the idea the better! There’s plenty of inspiration over on the Red Nose Day website, and each fundraising pack is free to order and full of great stuff to help get you started. One idea (which is always a winner) is to hold a bake sale, or as Comic Relief call it, a “Cake-A-Bake” day! The team in the UnCOVered office pretty much go mad for all things food-related, so we decided to hold our own cake-a-bake sale earlier this week and raise some money ourselves. Turns out we’re a very generous bunch as we raised £125!

Elsewhere around the University, the Sports and Recreation team and Faculty of Health & Life Sciences are holding an epic Red Nose fitness party, which mixes 6 mini fitness sessions with a live DJ and party atmosphere! If you’ve got any fundraising events planned for Red Nose Day, on or off campus, we’d love to know about it! Feel free to share your pics from the event and how your getting on by tagging us on Twitter or Instagram!