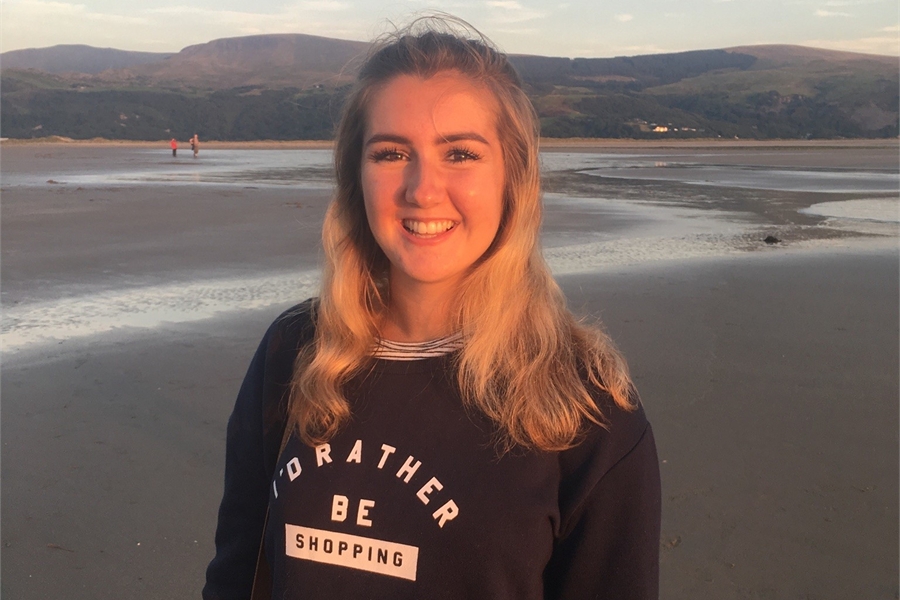 Bethan Ellis is a third year Sociology and Criminology student and also part of the Student Volunteering Team.

Originally from Brierley Hill in the West Midlands, Bethan said that she came to study in Coventry because of all the amazing opportunities that were available and the student experience sounded like it would be a good one. She wasn’t disappointed.

“Now I am in my third year, I realise that I made exactly the right decision to come to Coventry because of all the different things I have done since my first year.”

Bethan first started volunteering at a food bank local to her which formed part of her Add+vantage module.

“It was a bit of an eye-opener, said Bethan, “I was based in the warehouse and sorted out the food in date order and packed them up to send to the 20 or so distribution centres in Black Country area.

“I was totally amazed at how generous people were with their donations and also it brought it home to me just how many people relied on the food parcels.

“I used to collect food that was donated by supermarkets and when we were given items that didn’t qualify as food, such as toiletries and baby items, we would put them into special little packages and give them to families at Christmas, complete with a chocolate advent calendar and believe me, we had hundreds of advent calendars donated by the public.

“I met some amazing people at the food bank and their dedication to the people they help is second to none”.

Bethan has also volunteered to be a project lead at some of the Make a Difference Days at the food bank in Coventry.

However, this is just one part of Bethan’s volunteering experience and the other couldn’t be more different as she is currently part of the Citizens Advice Witness Service (CAWS) at Dudley Magistrates’ Court.

This kind of volunteering work is not that well publicised, but without their input, courts would grind to a halt.

“I am part of a team that looks after witnesses when they come to court to testify in a case. A majority of the people who come have not been before and it is a very scary experience,” said Bethan.

“I am there to explain the process to them, calm them down should they be nervous and stay with them until they are called into the courtroom.”

It is a very interesting role and for this kind of volunteering work, Bethan had to get specific training which lasted for three days and included an online assessment.

“The level of responsibility is quite daunting as we are privy to all sorts of information which has GDPR implications. Also, every witness we look after reacts differently, so our treatment of them has to meet their needs. There is only one salaried member of the CAWS, the rest are volunteers and so our input is vital”.

Bethan also accompanies the witnesses into the courtroom. This is usually the first time she hears their testimonies, which can be quite harrowing.

“You have to learn how to switch off and not let some of the more shocking testimonies have an impact on your personal life. I would not be much use to the witnesses if I can’t be strong for them.

“The child witnesses are treated with care and consideration and in a majority of cases, are spoken to via video link because if adults find the situation difficult, imagine how it is for a young person?”

Bethan would definitely recommend CAWS volunteering to others:

“Volunteering has given me a new set of skills which I can transfer to my life after University. CAWS has given me experience of working in a professional environment, doing a responsible job and has allowed me to grow as an individual.

“I came to Coventry University as a very shy, introverted person. I will be leaving as a fully-rounded, confident graduate, able to talk to people from all walks of life with a wealth of experience of the real world behind me. I am looking forward to my next adventure and hopefully, eventually get a permanent job in the Civil Service.”