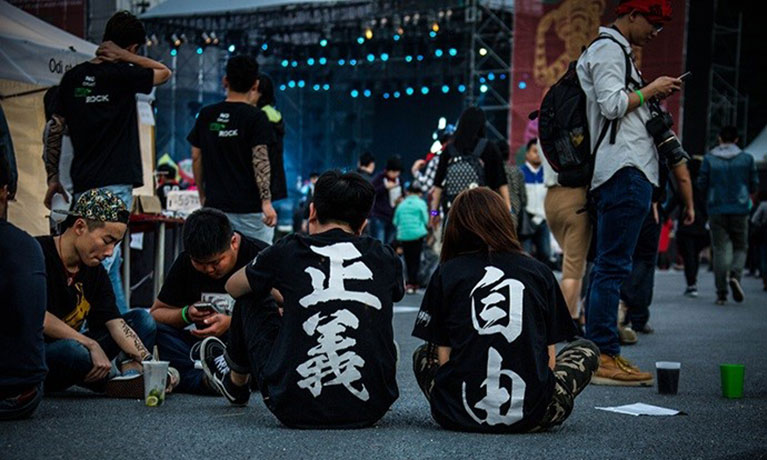 When we go to a music festival, many of us will experience what is called liminality. Liminality is a transitory and betwixt space and experience where people detach themselves from social norms and their everyday self. While the concept was initially developed in anthropology in the study of rites of passage in small scale societies, it has since been extended to cover ‘out-of-the-ordinary’ experiences such as what is experienced by participants in music festivals.

There are three main stages to rites of passage: separation from normal routines and practices, the liminal stage itself in which the subjects fall into a limbo, and re-incorporation in society potentially with a new status or identity. However, the reality might be a bit more complex and there are questions on whether a new identity emerges in the context of the visitor economy. This is what we aimed to answer in a recent paper exploring the construction of liminality in events (Wu, Li, Wood, Senaux & Dai, 2020).

A three-year research, combining field observation and 68 in-depth interviews at seven MIDI music festivals in China, allowed us to develop a more nuanced understanding of event attendees experiences and has three main contributions. First, we identify a more complex overall journey with 6 phases and the latent presence of liminality beyond the liminal stage itself. Second, we highlight the role of three types of ‘communitas’ in shaping liminality but also in maintain its effect long after the event. Finally, through that process, we show that visitors will not only change for the time of the festival but that deeper identity changes that will subsist post event are possible.

First, our findings highlight six stages in the festivalgoers’ overall journey, characterised by changes in their experience and behaviour, from anticipation before the event to identity-reconciliation afterwards. This helps us understand how liminality is constructed and its possible lasting effects. Before leaving their home, visitors’ emotions, attitudes and behaviours progressively change in anticipation of the festival. This anticipation phase is followed by an emancipation phase during which they embark on a journey to the festival, travelling from all over the country. During this time there was an excitement and a happiness about being ‘on the road’.

Upon arriving at the festival, visitors enter the liminal phase itself and begin to adopt different behaviours and identities, emphasising a sense of existential authenticity. This however doesn’t happen through the formation of a new identity but through the (re)discovery of a hidden one, their true self, one that has always been there but was suppressed by the social norms and structures of ordinary life. At the festival, on the contrary, ‘others’ provide the space and permission for these different behaviours and identities to be actualised.

The importance of ‘others’ is further explored through the concept of communitas. Research in events and tourism tends to focus on temporary communitas and emphasises its ephemeral nature. What we found in this research was empirical evidence for spontaneous communitas, but also ideological communitas and normative communitas. Our research shows not only the key dimensions they are built upon but also their effect on attendees’ liminal experience. Spontaneous communitas was constructed around shared music taste, ideological communitas supported by a shared utopia, and normative communitas built on friendship and maintained through social media post event (and in between two editions). The latter is particularly interesting as it extends beyond the liminal phase and thus provide the basis for maintaining the effects of liminality (particularly the unveiling of a new identity) upon return to the daily routine.

Finally, while the literature tells us that emotions fade as the festival finishes, we observed that visitors’ emotions and feeling of communitas actually appear at their most intense then. This is what we call the enhancement phase. It is followed up by a sequela phase in which participants seem to still mentally ‘live in the festival’ and behaved as if they were still there, even when they had physically left and returned to their normal life. Finally, they return to their ordinary lives, go back to work or study. However, through their liminal journey, they have uncovered a new social identity, which is maintained beyond the liminal phase through the normative communitas. This new social identity, perceived as a reflection of their true self, coexists with their displayed ordinary. We therefore argue that both the liminal experience and their new social identity contribute to a longer-term transformation of their lives.