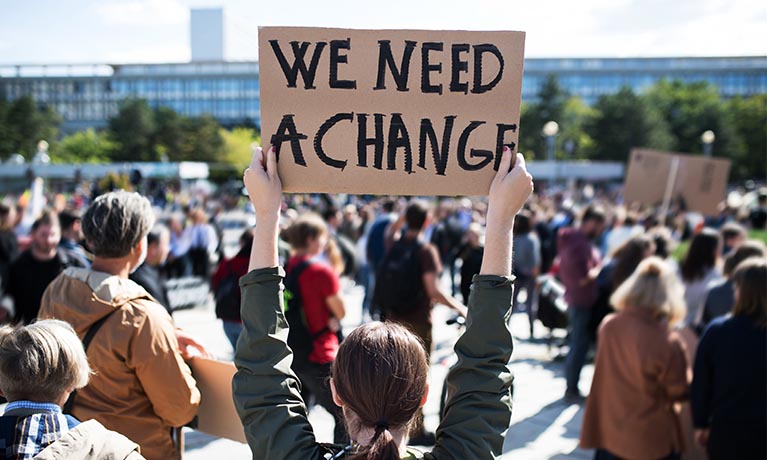 The road not taken

The Hindu Times summed up COP26 very neatly, “Leaders agree that time is running out but do little to change status quo”.[1] The conclusion of arguably the most important international climate change conference of our lifetime has been met with a cavalcade of criticism, most notably from campaigners and scientists.[2] The most commonly heard complaint is that the conference has failed to take sufficient action to arrest climate change, allowed too many loopholes for businesses and nations to exploit, was of limited ambition, and offered limited means to encourage compliance. If this all sounds familiar, it’s because we have been here so many times before. While it is easy to criticise national actors for their inability to respond to the challenge of climate change with alacrity and agility, they are frequently bound by historical international agreements dating back nearly three decades. It’s also easy to forget that COP26 is shorthand for the 26th meeting of the Conference of the Parties (COP), the group responsible for setting international protocols relating to climate change. To understand what this means requires some contextualisation.

The limitations of righteousness

Early research on greenhouse gases actually dates back to the 19th century and the work of Irish physicist John Tyndall.[3] But it would be Svante Arrhenius who would make the connection between CO2 in the atmosphere and the temperature of the earth’s surface.[4] In 1938, Guy Stewart Callendar took the work of Arrhenius and used it to show that CO2 emissions were slowly heating up the planet, a process we now understand as global warming.[5] Initially, such research was slow to generate a response from policymakers, though important steps included the creation of the Global Atmospheric Research Programme in 1967 by the UN and the World Weather Watch the following year.[6] By the 1980s, events like the Villach Conference (1985), the Brundtland Report (1987) and the Toronto Conference (1988) had placed climate change firmly on the international agenda.[7] However, in terms of far-reaching international agreements on environmental change, there is simply pre-Kyoto Protocol and post-Kyoto Protocol.

The United Nations Framework Convention on Climate Change (1992) was a preliminary treaty accepting the need for action related to climate change. The Kyoto Protocol used the framework of the convention to set legally binding agreements on nations. Each subsequent COP meeting agreed any amendments required. This gave the Kyoto Protocol huge significance, as it set the agenda for all subsequent decisions, in effect creating a path dependence that has proven increasingly difficult to veer from. The future success of the convention was inextricable from the success of Kyoto. Even at the time the Protocol was viewed as a useful first step and little else.[8] It set the bar too low and failed to create a framework that was inclusive and far-reaching. In the years since, it has been heavily criticised for placing the burden on too few and allowing key developing countries like China to avoid emission reduction.[9] Rosen (2015) assessed the outcomes of Kyoto through the lenses of compliance, efficiency and effectiveness and found it had failed on all three.[10] In short, the Protocol was a design failure: the open-ended timeframe encouraged procrastination, disunity created disharmony and small incremental changes locked nations into conservative policies.

Don’t think that money does everything

At the crux of the problem was the use of market forces to combat the worst excesses of pollution. The Crocker-Dales model proposed trading pollution rights through a cap-and-trade system, as a way of meeting environmental goals. In theory it allowed firms flexibility while moving them wholly toward emissions reduction.[11] It had worked well in the US as part of the 1990 Clean Air Act, but what was perhaps not appreciated at the time was, in that case, pollution reduction coincided with the availability of cheaper and less-polluting fuels; i.e. change had come about due to economic forces rather than regulation. The same business model was adopted in Kyoto and the result was that economic interests became baked into environmental regulation.[12] We are now left with the unedifying spectacle of economic interests and environmental interests somehow becoming conflated; and with the self-congratulation of a poacher turned game keeper, ‘big business’ has appointed itself as the champion of the environment. Indeed, a widely heard media narrative throughout COP26 is that corporates not governments are blazing the trail on action to mitigate the climate crisis.

In the UK, roughly half of the blue-chip companies comprising the FTSE 100 have set net zero goals.[13] Yet, examined more closely, some of those pledges appear to be little more than cynical PR. Beneath the corporate cheerleading and glossy marketing materials mapping business activities and aspirations against UNSDGs, a mere 25% of the G7-based companies that have made net zero pronouncements have aligned them with the scientific consensus that demands a 1.5-degree pathway.[14] Across the G13, that proportion drops to just 6%. Even where plans are set within the pathway, targets pledged by businesses are almost 30 years away and, beyond increasingly questionable investments in carbon offsets or credits, seemingly without any parallel enforceable obligation to alter behaviour in the short term.

That the goal of business was to escape COP26 with as little disruption to their world as possible is evident in the chronic lack of attention being paid to emissions from global shipping and aviation. Already today, approximately 100,000 container and bulk carrier vessels ply the world’s seaways, with a similar number of commercial flights taking off and landing daily around the globe. It has been estimated that just one container ship produces the same amount of pollution annually as 50 million cars[15], while a return flight from London to San Francisco emits 5.5 tonnes of CO2 per person – more than twice the emissions produced by a family car in a year.[16]

According to the European Parliament, unchecked these sacred cows of globalisation, and the linchpins of corporate wealth, will account for almost 40% of CO2 emissions by 2050.[17] That they are the elephant in the room at COP26 is unquestionable, yet implicit business and governmental alliances internationally mean that attention is diverted elsewhere. Indeed, rather than addressing the dangers posed by these modes of transport, they are actively championed as tools of economic development and prosperity. As if to underline this point, in a UK context, the Government’s announcement ahead of COP26 that tax on internal passenger flights would be cut, reinforces the conclusion that climate mitigation and net zero goals are fine, providing that they do not interfere with the economic goals, lives and lifestyles of business elites.

This is not an exit

Of course, to focus only on the richest classes as failing to care about climate change would be to indulge in the same rounds of the blame game that have inhibited change to date. Acting on climate change, exchanging short-term pain for long-term gain, is a task of the upmost difficulty. Ignoring climate change in the short term has benefits both to individuals and to organisations, values we tend to over-prioritise compared to longer term gains. By paying lip service or laying the blame elsewhere, individuals and organisations are able to justify lack of action. Nations negotiate but are so bound by past policy experience, current expectations, and future economic interests, that positive outcomes become ever harder to reach. So, we continue to push the problems further down the line for future generations to deal with; a poisonous legacy that will become their normalised life experiences. So much for climate justice.

[3] Jackson, R. ‘Who discovered the greenhouse effect?’ 17 May 2019. The Royal Institution. Online at: https://www.rigb.org/blog/2019/may/who-discovered-the-greenhouse-effect

[6] Kutney, G., 2014. ‘The players’ association: The United Nations’ in Kutney, G. Carbon politics and the failure of the Kyoto protocol. Routledge: London and New York.

climate action in the G20’ United Nations. Online at: https://sciencebasedtargets.org/resources/files/Taking-the-Temperature-in-the-G20.pdf

[16] Editorial. 2018. ‘Should we give up flying for the sake of the climate?’ BBC. Online at: https://www.bbc.com/future/article/20200218-climate-change-how-to-cut-your-carbon-emissions-when-flying

[17] Editorial. 2015. ‘Shipping emissions 17% of global CO2, making it the elephant in the climate negotiations room’ Transport and Environment. Online at: https://www.transportenvironment.org/discover/shipping-emissions-17-global-co2-making-it-elephant-climate-negotiations-room/