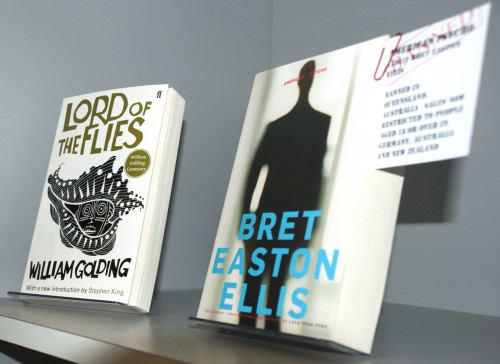 What do Black Beauty, Harry Potter and The Wizard of Oz all have in common? They all feature in books that were banned in countries across the globe!

To celebrate the opening of the ‘Disruptive Media Learning Lab’, librarians Olivia and Cameron have created a mini exhibition featuring banned books, one of the earliest forms of disruptive media. One of the first recorded occasions of book burning (to destroy copies) was traced back to 450BC when philosopher Anaxagoras wrote about ‘cosmological theories of a scientific universal order’ – in which he shared his doubt in the Gods’ excellency, for example claiming that the sun was a molten rock rather than a divine being. This view was deemed unacceptable and derogatory to the Greek Gods. His writings were destroyed, he was banished from Athens and was then charged with impiety – lack of respect or reverence to the Gods.
It’s not all about the olden days; the Harry Potter series, for example, was banned, and copies were burnt in Michigan USA as recently as 2003. Why? Because the stories used themes of magic and witchcraft…

“Authorities, Groups and individuals have attempted to ban, censor and burn books – practices that continue in the present day. Despite the continued efforts of these groups, society has grown more tolerant and relaxed with regards to potentially offensive (However) There is now a fine line between what one person may consider art and another deems may be offensive. [..] The debate over which material can be used both in and outside of the classroom continues today.”  – Olivia and Cameron

An example of debated educational books is Heather Has Two Mommies (1989) and Daddy’s Roommate (1990). Both books were banned from classrooms after parental complaints about references to homosexuality in material for children. Because heaven forbid we try and teach them about normal people being normal… In 1957, the director of Detroit’s libraries banned The Wizard of Oz for having “no value” for children of today, for supporting “negativism”, and for bringing children’s minds to a “cowardly level”. And as for Black Beauty… well, what could be wrong with a cute little horse story promoting kindness and respect? The title, apparently. The book was banned in South Africa because of the word ‘Black’ being used in the title – I kid you not.
Finally, Lewis Carol’s Alice in Wonderland was banned in China because of its “portrayal of animals acting with the same level of complexity as human beings” which was seen as “an insult to humans”. Oddly, they were fine with the Red Queen decapitating anyone who annoyed her that day, and with the subtle yet copious drug use… What? She eats a magic mushroom, for goodness sake! You can visit the exhibition on the top floor of the library, where it will stay in place until the end of March 2015. There are many more banned books than the ones I’ve listed here, and each book is displayed with a little caption about why it was banned. Interesting inclusions are: The Perks of Being a Wallflower, The Diary of Anne Frank and George Orwell’s Nineteen Eighty-Four.