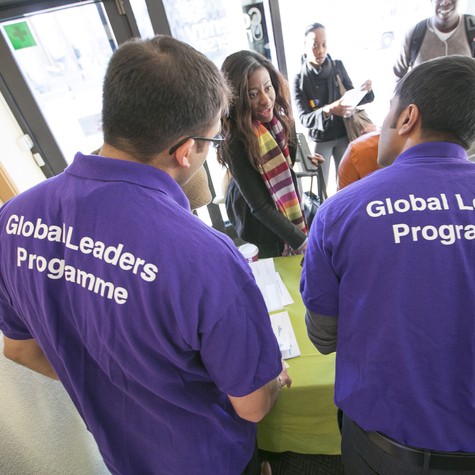 UnCOVered interviewed four students about their experiences with the GLP. In the first of four articles, the team discuss why they chose to join the Global Leaders Programme.

Liz Drake is from the UK. She is completing a Masters in Communication, Culture and Media. Liz has been attending GLP events since September 2014.

Maria Ximena Weiss Maldonado is from Columbia. She completed her MSc in Oil and Gas Management last year and attended the GLP events throughout 2014.

Ha Thu Nguyen is from Vietnam. She completed a Masters in Advertising and Marketing this year and attended the GLP throughout 2014.

What made you apply to join the GLP?

Celine: When I attended the briefing session called the Great Leader Talk, it made me decide to apply. I was told there would be more useful talks running every week, given by leaders from famous firms such as the BBC and Microsoft. I thought that this opportunity to get ideas about leadership techniques and insight into their thought process was vital to all students.

Maria: When I arrived at Coventry I found that most of my classmates had already enrolled on the programme. They told me about the different activities the GLP provided, I read more about the GLP and thought it was great to be able to improve different skills, aside from my academic ones. The GLP was mentioned all of the time by my tutors, who were always highly positive about it. They were always mentioning the different skills that previous students had learned from the talks, workshops and trips.

Liz:The GLP was one of the key reasons why I chose Coventry University for my MA. I previously spoke to businesses and professionals about my career, and their feedback was that companies and organisations would take a GLP certificate seriously. They said it would place me in a strong position when applying for job roles.

It was clear that the GLP would give me the opportunity to engage with world-class speakers and practitioners. At the same time, it would allow me to develop essential professional practical skills and the opportunity to socialise with like-minded students.

Ha: I knew the GLP program would equip me with the necessary knowledge and skills to function properly in a diverse and multi-cultural environment. This is the first time I’ve lived in a European country so everything was new for me. The GLP seemed like a good starting point to help me cope with obstacles and gain valuable experiences.

Maria: It was very easy and clear, especially because the GLP help desk were always very welcoming and kind.

Liz: Easy! I filled in the form; I was then swiftly emailed by the team and provided with a timetable of events to sign up for.

Ha: The process was very simple; I just attended a briefing session, signed up and soon received my GLP pack!

Coming up in unCOVered: ‘The best part about being a global leader’, ‘What I learnt from the GLP’ and ‘Why you should join the GLP! Meanwhile you can read our other GLP posts, or visit the main GLP website to sign up.