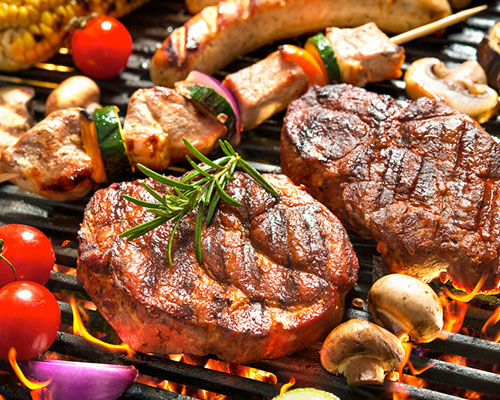 The spring and summer months might be a bit hit or miss in jolly old England, but it’s officially the 20th National BBQ Week and if one thing is certain, it’s that we don’t need much of an excuse for a feast.

So whether you’ve got to cook under cover or actually get to sit in some sunshine, here’s some of the UnCOVered team’s keys to making your barbecue more successful than ever before!

Everyone has their own opinion of what makes the perfect burger, but we all have to agree that the following are a must…

First thing’s first, you need a proper burger, none of this frozen nonsense that shrivels into nothing as soon as it touches the grill. It’s worth spending the money for quality. On the other hand, you can put your gourmet cheeses away, you need that dirty, rubbery, weird-shade-of-orange, sliced cheese to make a real burger. The bun needs to go on the barbie just to give it a nice toasted effect, and don’t scrimp on the sauces!

A lovely array of condiments can really impress at a BBQ, so don’t forget the Peri Peri!

It’s hard not to love a bit of daytime drinking when the sun’s out, even if it’s just a Coke.

However, if you’re going all out for BBQ Week, making your own cocktails is a must (there’re still plenty of non-alcoholic options too!) Everyone knows when those fruity concoctions start to flow so does the party. Give yourself a challenge and see what you can create.

It’s worth mentioning that I’m still yet to find anything more refreshing than ice cold still lemonade while wearing little shorts. Trust me.

Yes, it needed its own segment in this blog, yes you’ve probably had it a million times at Nandos and yes, grilled cheese on a barbecue is one of the greatest things known to man.

Brought to the mainstream by the geniuses over at Epic Meal Time, the bacon weave is a true testament to how far the human race has come. By weaving together bacon strips to form something of a mesh blanket of piggy goodness, you can completely revolutionise your BBQ game.

Slip them into burgers, wrap them around other meats, even turn them into tacos! The possibilities of the bacon weave are only limited to your imagination. Give it a shot.

Corn on the cob

Although BBQs are usually known for their delicious meaty offerings, there’s no need to leave out our vegetarian and vegan buddies. Corn on the cob tends to be one of the tastier veggie options on the grill. There’s just something about it that once it’s been a little blackened, is truly irresistible.

Try seasoning with your own combination of herbs, salt and pepper after grilling to really make the flavours pop!

Let’s be honest, as nice as it is to cater for our herbivore homies, the barbecue is meat-lovers’ territory! Marinated chicken legs, sausages, kebabs, these are all vital to the success of your BBQ.

Personally, I like kebabs because you can have a little fun with them. Why not mix things up by changing what you put on the skewer? Take things like chorizo, pineapple, prawns and peppers to create your own styles and see what works best.

And there it is! Plenty of ways to make your barbecue the best during this most sacred of times. National BBQ Week may only last 7 days but don’t worry, you have a whole summer ahead to make the most of your grill.