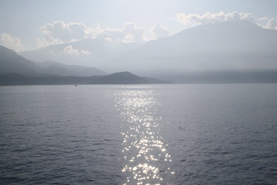 A sailing boat is the perfect platform for people-watching. A crowd of Greeks sit outside a bar drinking ouzo, the harbourmaster strides up and down the dock, and beautifully bronzed foreigners lounge on a yacht further along the pontoon. Across the Ionian Sea, islands appear through the haze created by the brilliant sun. But closer to our flotilla, our scrawny co-captain Alex dives into the blue water, emerging to swear and splutter indignantly. A line (rope) has wrapped itself around the propeller of a boat in our flotilla, and after losing a game of rock, paper, scissors, he has been volunteered to fix it. Alex is wearing a child’s snorkel found in the depths of a locker, and his shorts – the colour of a brilliant Greek sunrise – clash horribly with his ginger hair. Alex is brandishing an underwater camera in the place of a torch, so he is forced to dive into the Ionian Sea, blindly tussle with the rope, take a picture of his progress, resurface to see what else he must do, and then repeat. His progress is hindered by the deep blue tint the sea casts over his pictures, and one of his photographs is almost entirely obscured by tiny silver fish.

In the meantime, the rest of the crew is going to eat. Although Palairos is on the Greek mainland, it is relatively untouched by the rapid spread of the tourist trade so evident in Athens and Crete. During the short walk to our restaurant of choice, we pass mosaics beautifully depicted in broken tiles. Next to a doorstep, a dolphin leaps out of cerulean waves, and on the side of a shop a scene from Hercules’ twelve labours has been carefully constructed. The restaurant we’re heading for is directly across the road from the beach, open at the front for an uninterrupted view of the sea and distant islands. Leafy vines with bright pink flowers climb over a wooden frame above the tables outside, and the crew heads towards the tables shaded in dappled green.

If you are ever fortunate enough to eat in a Greek restaurant, even looking at the menu can be an experience. It is best (I have found) to order a bit of everything and share it around, because for some, choosing between kalamata olives and tzatziki as a starter is just too difficult. But before any decisions have to be made, the waiters provide baskets of sliced bread, olive oil and vinegar. After an exhausting day of pulling the odd line, swimming and relaxing in the sun, everyone needs a drink and orders lemonade (which will always be a dusty bottle of lemon Fanta) or Mythos (a popular brand of beer) in appalling Greek. The waiters, for their part, will attempt to understand and then give up, repeating orders in excellent English.

After the sunset, the waves turn a pale lilac. A woman strolls by, hand wound around the strings of at least fifty Disney character balloons, her silhouette a confusing mass of bobbing shapes. A moped sputters past, weighed down with a family of three and their shopping – a relatively small load in Greece. The most I’d seen at that point was a family of four and a dog, with shopping, on an island so small that cars were banned during the summer.

Over a dessert of baklava and pistachio ice cream, finished with shots to aid digestion (the restaurant has run out of ouzo but we are assured that tequila will do the trick) Alex triumphantly peruses the pictures of the propeller. By the time the waiter brings the bill, however, he is groaning with his head in his hands. Another look at the pictures has shown that his efforts were for nothing – the rope is still securely wrapped around the propeller.