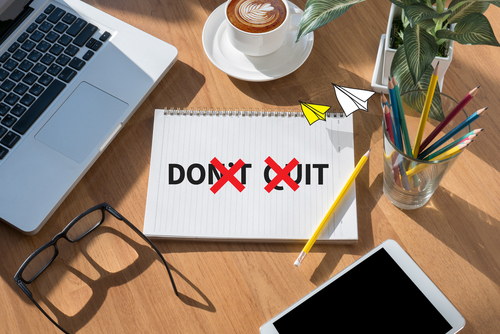 There’s a sour feeling that seems to creep up even by looking at the word ‘quit’, but giving up is something we can all do a bit too frequently. It’s just so easy, a way out often littered with enabling excuses and half-full promises for the future.

“I have to stop going to the gym, I just don’t have the time. But I’ll watch what I eat instead…”

“I can’t finish this book, it’s too complicated. But I’ll start this one instead…”

“I don’t know if I like my course, maybe I should drop out of uni altogether…”

Probably all too familiar, but sometimes things need sticking out a little more to know if quitting is really the right option. Sometimes you just need some guts and reassurance that you can do it.

Join UnCOVered as we look at why feeling like this isn’t just important, it’s essential.

Nothing worth having comes easy

Every single day obstacles stand in the way of people’s goals. No matter who they are or what they want to achieve, we will all feel like the odds are stacked against us at some point. But that’s actually a good thing!

From what I’ve seen and found in my life I can wholeheartedly say that nothing worth having comes easy. And the really tough moments, the moments that make you want to give up and quit? These are the moments that make all the difference. They’re character defining and show you who you really are.

The main thing to remember is that you can get through the rough spots, and eventually, the pride you feel for doing so will mean more than anything else.

Take for example people who are extremely successful in their fields, deterring them from their goals must be almost impossible. JK Rowling, author of a certain collection of wizarding novels, had just gotten divorced, was on the dole and barely had enough money to feed her child in 1994.

Through realistic eyes you’d have to think giving up on her writing would’ve been the sensible choice. However, after having to manually type each copy of the first Harry Potter book to be sent to publishers and facing dozens of rejections, she became one of the most successful writers in history and helped millions to fall in love with literature.

If you have a vision, it’s far too early in your life to be giving up on it. Then again, Colonel Sanders was sleeping in his car in his 60s waiting for someone to agree to sell his chicken recipe, so don’t give up if you’re older either!

The most important thing is to not make any rushed decisions, especially if you’re feeling overly emotional about the situation. You might be frustrated or angry with yourself if you feel like you’re falling short of your goals, but these are really negative states to be in. Give it some time to settle down and make your decisions with a calm and rational mind.

Besides, if you hadn’t noticed, every single one of the really successful people you read about failed and experienced rejection. Harry Potter was turned down by publishers, no one wanted to be part of KFC and even Steve Jobs was once fired. It can actually be fun to fail and have challenges set out for you. So dust yourself off and keep going, because things will get better.

I know this is all easier said than done. Being a strong person who feels like they can get through anything that’s put in front of them doesn’t happen overnight. This is something you have to work at too. Even the most confident people are blindsided with surprising knocks, affecting how they feel about themselves and what they can accomplish.

If and when that happens it’s important that you try again and build on whatever set you back, even if it means… Asking for help! (No one should ever be ashamed to ask for help). It’s important to remind yourself how far you’ve come to build your confidence and self-belief. You’ve gotten through problems before; you will get through problems again.

And when you do succeed, don’t forget to congratulate yourself too! It’s good to feel a little proud about your accomplishments and see your dedication paying off.

So let’s say things really aren’t improving, you’re stuck in this rut and nothing you’re doing seems to be working. I suppose if you’re going to quote anyone here it might as well be Einstein…

“Insanity: doing the same thing over and over again and expecting different results.”

Cliché? Yep. True for every situation? Absolutely not. Just trying to sound smart by quoting Einstein? One hundred percent. However, if you’re finding your approach to assignments, the gym, baking, friendships, or whatever else your goals may entail simply isn’t working. It’s probably time for a new approach.

Get some advice, explore your options and see what’s working for your peers or friends and family and take it on board. You might just find the change that snaps everything into place.

Of course, there is a big difference between giving up on something you really wanted to achieve and deciding that it isn’t for you, or that you’ve gotten everything that you wanted out of it.

If it’s time for you to take things in a different direction and finish, rather than just quitting, maybe it’s for the best. I tend to feel like the really big decisions in your life always work out for the best, and more often than not, you end up in the right place at the right time. You shouldn’t feel guilty or shameful over something not going quite the way you planned, be thankful for the experience instead!

It’s your life at the end of the day, and this is the stage of it where one day you’ll be able to look back and be proud of your first real accomplishments. Whether it was tough, frustrating, enjoyable or sad, you’ll be able to say you did it.

Besides, a road without twists and turns wouldn’t be one worth travelling on in the first place.