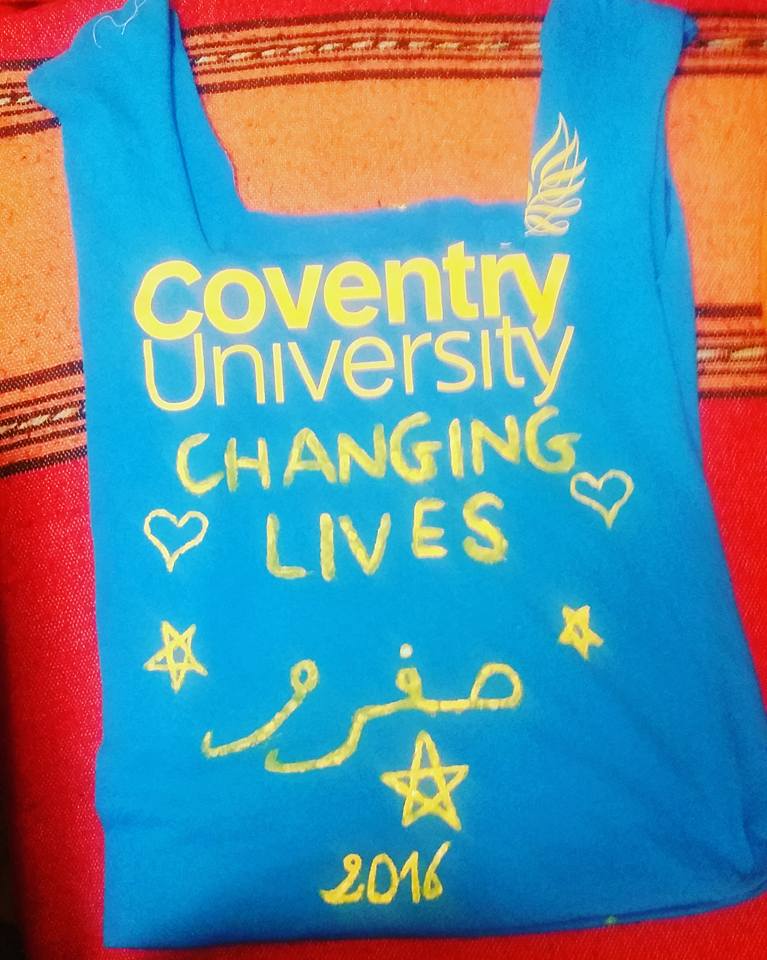 I, along with 10 others, were chosen to participate in a community regeneration project, which would assist with building effective Eastern and Western partnerships. Considering the area of focus for my research is the contemporary Middle East, I must admit I was arrogant, and assumed I already knew much about the faith, culture and customs, as well as what the community would need from this project. I didn’t feel like my perceptions could be challenged, or that I could make real human connections in less than two weeks, especially with people who did not speak the same language as me! I think all of us, before leaving for Sefrou had preconceived notions of what to expect, how we would engage with the locals and what we were going to achieve.

Sefrou is not a town that can be summed up with a few descriptive words, nor photographic evidence. For you cannot capture the atmosphere of the markets, the smell of street food cooking, or the hospitality and thoughtfulness of the locals. Sefrou captures you in a way that can only be experienced, not explained. When we arrived in Sefrou, it was very dark and we were very tired, so we did not get to witness the raw beauty of the town. However, at around 5/6am I was awoken by the sound of the prayer calls vibrating across the city, and I ran to the rooftop immediately wondering if something was wrong! As I stepped onto the terrace, my breath was snatched from me, as I was exposed to a vibrant city – the birds singing almost in harmony with the prayer calls, and I knew then that my heart had been stolen! The spirituality of the town engulfs you, as you realise there is a strong connection to religion in every aspect of life.  I expected to discover the communities’ complex links with one another and the connection with the land, but I did not expect to learn more about Islam. This reminded me of why it is important to immerse yourself in another culture, as everyday there is something new to learn.

As you step out and head towards the markets, you enter a kind of ‘arena of chaos’! Whether the sellers are a part of the formal or informal economy, various traders look to sell their produce to generate their daily income. However, if you look beyond the beautiful woven fabrics and fresh fruit and vegetables, you realise the town is slowly but surely becoming dilapidated. On the first day, we walked through the Medina, collecting trash along the way. Now, considering I would not dare to collect trash at home on the ground (the word “yuck” comes to mind!) this was truly eye-opening for me. In Sefrou, there were no trash or recycling bins outside each home, therefore the entire town had trash EVERYWHERE. You forget how privileged we are to have something as simple as rubbish and recycling bins, yet in the UK we still litter so much. This had me thinking: here I was about to introduce the concept of sustainability and looking after the environment, when over in the West, many of us still do not understand the harm we cause to the environment.

Walking through the streets of Sefrou not only humbled me, it also reminded me that we are very disconnected from the Earth – we need it to survive, yet we treat it as a second thought. I feel by collecting rubbish around Sefrou, I gained a spiritual bond with the land, and recognised the importance of looking after it. Culture Vultures not only pushed me out of my comfort zone to get involved, but also through their use of the arts in every aspect of their work, and it showed me how important creativity is to every aspect of our life. It is a fantastic way of facilitating cross-cultural dialogue, and I truly admire the work that Jessica, Fatima and Brahim undertake each day to fight for a better Sefrou.

I facilitated one of the various discussions we had about political, social, and environmental issues within Sefrou. It was about “Youth, drugs, and unemployment”, and my goodness, was it a hugely engaging process. We had four local youths come and participate, sharing their feelings and struggles in regards to education, employment, and the trap of using drugs. We all recognised how privileged we are in the West to have access to a free education.The youth of Sefrou may be regarded as the forgotten youth; their opinions, feelings and progression does not seem to matter, even though they are the future leaders of the country. By engaging with them and listening to their stories, we created a positive relationship with them, instead of reading the news and generating assumptions about their issues and needs. They also learnt from us that we have similar problems, and although our problems may not be as extreme, I felt we all learnt something from one another and had mutual respect. This beautiful, vibrant town is aware of its potential, the community just needs assistance along the way. Vast amounts of large NGO’s tend to focus on capital cities and fail to recognise that rural communities are in need of crucial development. However, regenerating a community is a process, not an event, and Western societies assume what developing countries need, instead of recognising that individuals may have answers to their own problems. The people of Sefrou are the embodiment of community spirit; the kind faces you see at each corner are only a small faction of the warmth that resides in Sefrouian’s hearts.The determination to regenerate the community, to preserve the old while adapting to modern advancements, only solidifies the innate strength and resilience of the citizens. If there’s a lesson to be learnt from interacting with Sefrouian’s is that we should all strive to treat our community as family. Once you all work together, there’s no limit to what you can achieve.

The greatest lesson to take from Sefrou is that we all have wisdom, knowledge, and personal strengths, and it’s about working alongside the community towards their shared goal for a better future. People have answers to their own problems and the only way to ensure the work we undertake remains sustainable, is to engage with the community. This is not “goodbye” Sefrou, it’s only the beginning of a new chapter!